The governor says the Missouri National Guard has played a critical role in the COVID-19 response this year. 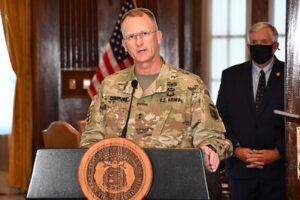 He also says the Guard’s largest current effort is in support of the state Department of Health and Senior Services (DHSS), providing 118 service members to support data entry and call center operations, as well as community-based testing efforts.

“Of these 118 service members, 60 are in fact involved in supporting the community based testing, moving from one location to another across our state at designated areas by Health and Senior Services,” says Cumpton.

He says the Missouri National Guard has also distributed about 288,000 student meals, in partnership with the state Department of Elementary and Secondary Education (DESE).

Governor Parson praises the Guard for helping to construct and staff an alternate care hospital this spring in Florissant, which is located in north St. Louis County. The governor notes that site was built in 11 days.

The Missouri National Guard is part of the state Department of Public Safety (DPS).

DHSS says Missouri has had 11,170 confirmed COVID cases in the past seven days, out of more than 115,000 tests conducted.