You are here: Home / Archives for Missouri Lottery Commission

Legislation that would legalize sports wagering and slot machines was approved by a Missouri House committee in Jefferson City on Tuesday. 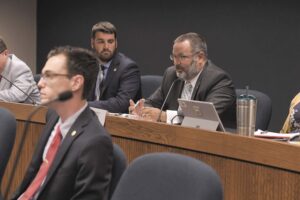 The comprehensive 31-page gaming bill, which is sponsored by State Rep. Dan Shaul, R-Imperial, will now head to the House floor.

The House Special Committee on Government Oversight also voted to approve an amendment from Shaul, to allow sports wagering and slot machines in “entertainment districts.”

“What this does is basically allows (the) Power and Light District (in Kansas City) and also Ballpark Village areas to become an entertainment district so that they could also do sports betting and VLT’s,” Shaul testifies.

“Are we sure that it’s limited to those two (Power and Light and Ballpark Village), with these definitions,” Meredith asks Shaul.

“I believe before this bill is done, they’ll be some expansion of that to some other players that will want to be involved,” Shaul responds.

Missourinet checked with Shaul’s office after the hearing, to confirm specifics about the language. Shaul’s office says Ballpark Village and Power and Light are examples of entertainment districts and possible locations for the sports betting and VLT’s.

The slot machine issue has been a high-profile issue at the Missouri Capitol, dominating discussion at several House interim gaming hearings in the fall. The Missouri State Highway Patrol testified in October that the number of complaints it’s received about illegal gambling has increased from 39 in 2018 to at least 145 in 2019. Most of those complaints were about slot machines.

Under the Shaul bill, the video lottery terminals would be connected to a centralized computer system developed by the Lottery Commission. No terminal could be placed in operation without connecting to that system, under the bill.

It also prohibits those under 21 from playing the slot machines.

As for the overall bill, Shaul says 18 states will have implemented sports wagering, by the end of 2020. It will be heading to the House floor.

Representative Meredith says the legislation should go to a statewide vote, noting the Missouri Lottery’s creation and other major gaming issues went to voters.

Meredith is referring to a statewide vote in November 2018, involving bingo. His amendment was defeated in committee.