You are here: Home / Archives for Missouri House Veterans Committee

Legislation to honor a Missouri veteran who was killed in Afghanistan will be heard by a House committee in Jefferson City on Tuesday. 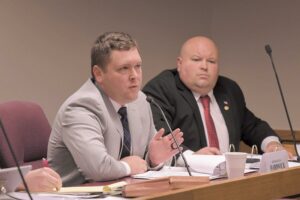 The House Veterans Committee will hear testimony on a bill from State Rep. Bill Hardwick, R-Waynesville, that would designate the Missouri National Guard Armory in southwest Missouri’s Joplin as the Sergeant Robert Wayne Crow Memorial Armory.

Sergeant Crow was killed in 2010 in Afghanistan, when insurgents attacked his vehicle with an IED.

He was assigned to the 203rd Engineer Battalion of the Missouri National Guard in Joplin.