You are here: Home / Archives for Missouri House Special Committee on Criminal Justice 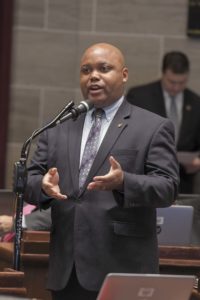 “We’ve been collecting this data for 20-plus years and when we started out, they found that African-Americans were 33 percent more likely to be stopped in vehicle stops than whites and now it’s all the way up to 91 percent,” Dogan says.

He says that’s the largest racial disparity in Missouri history. His committee will be hearing testimony today, and Dogan hopes to hear from law enforcement officers, prosecutors, community leaders and the public.

He says there are currently no consequences for racial profiling, in state law.

Chairman Dogan expects the committee to draft a report by December, and wants to see reform legislation filed in January. Dogan says the committee is also looking into civil asset forfeiture, in addition to racial profiling.

“So we’re hoping to find some sort of common ground where law enforcement will, one, admit that there are problems with both of these issues and two, help us find out what some solutions are that are going to be palatable to them,” Dogan says.

He notes State Auditor Nicole Galloway (D) found that $9.1 million in cash and property were seized in 2018 through civil asset forfeiture, compared to $7.1 million in 2017.

The committee will hold a second hearing on August 1 at 9 a.m. at the Robert Mohart Center in Kansas City.

The House Special Committee on Criminal Justice was formed during the 2019 session, to explore ways to reform Missouri’s criminal justice system.

Dogan and Roberts worked together with a bipartisan group of lawmakers to pass House bill 192 this year, which revises mandatory minimum sentences. It requires Missouri’s Probation and Parole Board to evaluate those serving mandatory minimums and decide if they should be released.

Supporters say about 48 percent of Missouri’s prison population is serving time for drug offenses and other nonviolent crime.

Click here to listen to Brian Hauswirth’s full interview with State Rep. Shamed Dogan, R-Ballwin, which was recorded on July 22, 2019: