The Missouri House is expected to give final approval to a proposed $34.9 billion state operating budget Wednesday in Jefferson City. 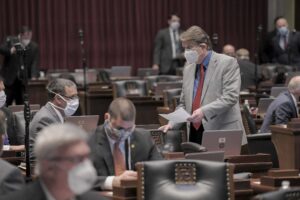 The House will gavel-in Wednesday morning at 10, and House Budget Committee Chairman Cody Smith, R-Carthage, tells Missourinet they’ll take up the budget at that time. He notes the Legislature must approve a balanced budget by May 8, under the state Constitution.

“It is the one constitutional duty of the Missouri General Assembly, and not only that but to pass a balanced budget and one that is on time,” Smith says.

The House voted to give initial budget approval on Monday. The proposed budget includes about $10 billion in general revenue, $14.5 billion in federal funding and another $10.3 billion in other funds.

The House Budget Committee’s ranking Democrat, State Rep. Kip Kendrick, D-Columbia, spoke about the budget on the House floor on Monday. He expresses his frustration, saying the process has been rushed. Kendrick wants lawmakers to wait for a special session this summer.

“This (state operating) budget is being rushed. It’s being rushed in a pretty profound manner,” says Kendrick.

Kendrick says waiting until a special session this summer would give state lawmakers and the governor’s office a better forecast for state revenue projections. He emphasizes that he is not expressing frustration with Chairman Smith.

House Minority Leader Crystal Quade, D-Springfield, also spoke on the floor on Monday. She also prefers waiting for a special session this summer to approve the budget, and notes Governor Mike Parson (R) made comments at recent media briefings indicating that was a possibility.

The next fiscal year begins on July 1.

As for Chairman Smith, he tells Leader Quade the House will likely return to the Capitol this summer, for a special session on another supplemental budget.

“And what we are doing today (Monday) I think is taking a snapshot of where we are today, based on what we can know, which is not a great deal, of how the state budget will be impacted by the COVID-19 pandemic,” Smith says.

Lawmakers and staff members are being encouraged to wear their masks today, and to continue to practice social distancing protocols.