You are here: Home / Archives for Missouri Ethics Commission

The Missouri Ethics Commission is offering a new tool to give Missourians a look at how money is flowing in and out of some candidates’ campaigns. 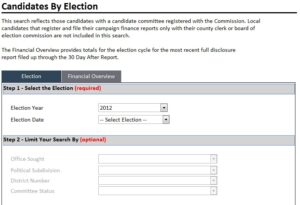 The latest information comes from the April quarterly report. Two more reports will be issued before the August primary.

“There’s a July quarterly, which will be due on the sixteenth of July, and then for those participating in the August primary election there’s an eight day before, that actually is due July 30.”

With the various tools on the Commission’s website, Allen says voters can learn a lot.

“We also have another good search called ‘Committee Expenditures for Candidates.’ You can type in a candidate’s last name and it’s going to show you the money that is reported as spent to either support or oppose a candidate, and normally that would be coming from a PAC, a Political Action Committee.”

Allen things many Missouri voters want to know this kind of information.

“It gives good transparency for the public. If a regular citizen is interested in knowing what the difference candidates in a specific race are spending their money on or how much money they’re receiving, this gives them a quick snapshot of all the candidates.”

An ethics bill returning to the Senate is difficult to recognize after the House loaded it down with numerous provisions unrelated to ethics. Still, the Senate sponsor sees something to work with in the much changed bill.

Senate President Pro Tem Charlie Shields, a Republican from St. Joseph, isn’t ready to declare ethics reform dead this session, despite the controversy surrounding how the House forced through a loaded down bill last week.

“Not at this point,” Shields tells the Missourinet. “They’ve sent the bill over. We’ll send it to conference. Depending on what comes out of conference, we’ll decide whether that bill is alive or dead. But at this point it really wouldn’t have made a lot of difference what action took place in the House, how big or how small, that bill was probably headed to conference no matter what.”

HCS#2 SB 844 changed greatly in the House. House Democrats tried to force the issue of ethics reform with a discharge petition that strips a special ethics committee of two bills and placed them on the House calendar. Majority Floor Leader Steven Tilley of Perryville refused to bring either bill to the House floor for debate. Instead, House Republicans rushed a greatly changed SB 844 through the Special House Committee on General Laws and onto the floor on Thursday. Republicans added several provisions unrelated to ethics, highly charged partisan provisions Democrats strongly oppose. The bill passed on a party-line vote.

Shields understands the issue lawmakers have been working hard on all session has now become extremely political.

“Clearly, it is very political in the House,” says Shields, “although I don’t think that is the case in the Senate. I think we’re focused on doing a good ethics bill. It’s a bi-partisan issue in the Senate. My hope is that some of those discussions that we have in the Senate can transpire in the House and we end up with a good bill before six o’clock on Friday.”

Shields says the issue will be settled in a conference committee between the Senate and the House this final week of the legislative session. The senator says any ethics bill needs to contain language giving the Ethics Commission authority to conduct investigations as well as rid the political system of money laundering, such as making contribution transfers from one committee to another in an effort to hide who is contributing to whom. The bill doesn’t seem unredeemable in his present form to Shields.

“I’ve seen bills that have been in far worse shape than this come back out through the process,” Shields says.

Legislators have four days to come to an agreement on ethics.

The Missouri Ethics Commission takes another step forward in its effort to make information easily accessible by computer. On the heels of the Commission’s release of four web videos designed to help lobbyists comply with state rules and regulations the agency has now unveiled two more web tutorials – these ones aimed at helping candidates and campaigns comply with election laws.

“We continually work to improve the information that we provide to our filers and to the public,” said Ethics Commission Executive Director Julie Allen in an interview with the Missourinet. “We’ve released two campaign finance tutorials on our web site. One is Candidate Reporting Requirements and the other one is about Forming a Campaign Finance Committee.” END_OF_DOCUMENT_TOKEN_TO_BE_REPLACED

The Missouri Ethics Commission not only requires comprehensive information filing of politicians, campaigns, and committees – lobbyists are expected to file information, as well. Executive Director Julie Allen says a set of tutorials is now available on the Commission’s website.

“It gives some comprehensive information about lobbyists, their reporting requirements, the available online Commission resources and searches, and navigating the lobbyists’ online filing system,” said Allen in an interview with the Missourinet. END_OF_DOCUMENT_TOKEN_TO_BE_REPLACED 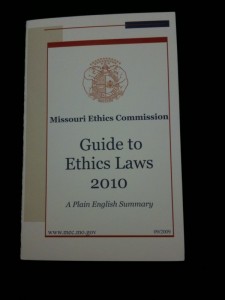 The 2010 election year is rapidly approaching and the Missouri Ethics Commission is offering candidates and political campaigns a guide to the do’s and don’ts of campaigning. The Guide to Ethics Laws 2010: A Plain English Summary is available through the Commission and will be given to any candidate who files to run for a public office or for any campaign that files on behalf of an issue or initiative. END_OF_DOCUMENT_TOKEN_TO_BE_REPLACED

The race for Missouri’s 4th District Congressional race is heating up beyond the campaigning. A Warrensburg man has filed complaints with both the Federal Election Commission and the Missouri Ethics Commission regarding the campaign practices of Republican candidate Bill Stouffer, a State Senator from Napton.

Central Missouri University political science major Chris Brockway of Warrensburg, who identifies himself as a Democrat and a supporter of Congressman Ike Skelton, had the complaints notarized and filed on Monday. He alleges several violations of federal and state election and ethics laws. Included in the allegations is a complaint that Stouffer’s state committee, Friends of Bill Stouffer, paid $7,500 in consulting fees to Axiom Strategies of Kansas City. Brockway contends the consulting work had nothing to do with a possible statewide political campaign by Stouffer, but was actually an effort to test the waters for a congressional run. END_OF_DOCUMENT_TOKEN_TO_BE_REPLACED

The Missouri Ethics Commission has begun offering campaign finance record-keeping classes to candidates and campaign personnel. The first of the classes was held last week in Jefferson City, with two more sessions set for next month in the capital city, and regional classes being put together for early in the new year.

Ethics Commission Executive Director Julie Allen says most people involved in politics want to follow the rules and report accurately to the Commission, but they sometimes have difficulty understanding the rule. END_OF_DOCUMENT_TOKEN_TO_BE_REPLACED