You are here: Home / Archives for Missouri Disability Empowerment

Legislation that would prohibit Missouri school districts from using seclusion rooms for anything other than the health and safety of students and teachers will go before the House Elementary and Secondary Education Committee in Jefferson City Tuesday morning. 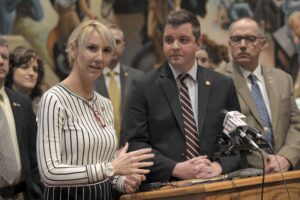 Representative Mackey, a former teacher, tells Capitol reporters that numerous school districts don’t follow their own policies on this issue.

“What I have seen over the last year has been nothing short of appalling,” Mackey says. “Tiny, empty closets built and designed solely for the purpose of isolating small children.”

Mackey and Bailey have filed identical bills, which would limit restraints and seclusion to instances of immediate physical and safety threats. Their legislation would also require school districts to report all occurrences of restraint and seclusion to the state Department of Elementary and Secondary Education (DESE). 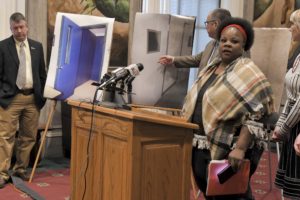 “I mean, this picture speaks for itself. Not a place where compassion and learning can occur, so you see why kiddos get traumatized and they don’t want to go in there anymore,” says Bailey.

Bailey and Mackey say the photos they showed to Capitol reporters are from the Francis Howell School District in St. Charles County, and from Columbia Public Schools (CPS). They say there was an incident at Francis Howell two years ago, and that Francis Howell has changed their policy.

As for CPS, the district spokeswoman there says the Columbia photos shown at the press conference were misleading. CPS spokeswoman Michelle Baumstark tells KMIZ-TV that the photos were taken during construction of the Columbia Center for Responsive Education.

Meantime, school superintendents, teachers and parents are expected to travel to the Missouri Capitol on Tuesday morning to testify about the Bailey-Mackey legislation. The hearing begins at 8 a.m.

“I think it will pass the (House) Education Committee and now what happens going forward, we’ll have to wait and see,” Basye says.

Bill supporters include Missouri Disability Empowerment, which notes some of the children being restrained and placed in seclusion rooms have disabilities.

Supporters also note that the Illinois governor issued an emergency rule before Christmas, which banned all seclusion in Illinois schools.

Click here to listen to Brian Hauswirth’s interview with Missouri House Elementary and Secondary Education Committee Chairman Chuck Basye, R-Rocheport, which was recorded on January 13, 2020 at the Statehouse in Jefferson City: