You are here: Home / Archives for Missouri Department of Commerce and Insurance

Roughly 10,000 people age into Medicare healthcare coverage each day in the United States. In Missouri, about 1.16 million individuals are Medicare beneficiaries.

“It’s kind of confusing and our counselors are trained to help people understand the differences between all the A, B, C, D’s of Medicare and then what their options are and to make sure they take advantage of the appropriate times to enroll in the different programs and avoid any penalties as well as, of course, helping them save money,” he says.

The department helps about 30,000 to 40,000 individuals each year during open enrollment time.

“The sooner people contact us, the more likely we will be able to help them with plenty of time before the deadline,” he says. “Most of our people who come in during the open enrollment period – that’s when about 40% of our business happens across the year is starting in October through December. During open enrollment, our beneficiary satisfaction survey results say that 95% of the people who come to us recommend us to other people.”

Due to the pandemic, CLAIM volunteers are focusing their counseling efforts by phone. To make an appointment, call 1-800-390-3330 or visit missouriclaim.org Representatives are available 9 a.m. to 4 p.m. Monday through Friday.

About 15,645 patients have been tested by a public or private lab. 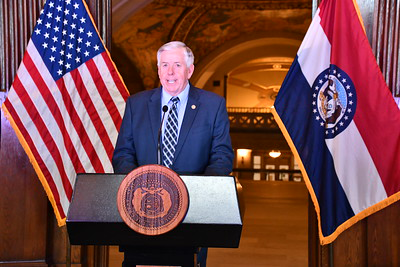 “I think we’re still 60, 90 days away of getting through this virus and that’s kind of a best case scenario,” says Parson. “But I do look somewhere between the middle of April. I think we’re going to be able to get some new information, new statistics, I hope so to be able to do that and hope we start turning the corner. But the reality of it is, I think we’ve got to all realize that this is going to be a long-term and I don’t want to give false hope to anybody.”

Many Missourians cooped up in their homes got out to a state park over the weekend to get some fresh air and enjoy the weather. But word has gotten out that some were not keeping their social distance. Parson says he is considering whether to close state parks.

“A little disappointing of what happened over the weekend at some of the state parks. We’re trying to leave facilities like that open for the general public, but unfortunately people didn’t abide by the rules. We’re talking about the social distancing,” says Parson. “So, we’re going to make that decision. We’re in discussions about that right now, whether we close those parks down or not.”

The rules the governor is referring to include remaining six feet apart and limiting gatherings to no more than 10 people. Parson says he plans to expand his social distancing order.

“You know I think it’s just a matter of where we move that timeframe to,” says Parson. “Again, you know I’m thinking we’re at least 30-60 days away from any kind of lifting any orders, but we’re evaluating that daily.” 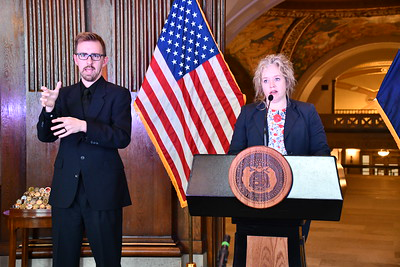 Several announcements were made during today’s press briefing. Many of them were reminders for those who watch the daily briefings but perhaps new to those not following the state’s coronavirus response as closely. Two new announcements deal with daycare providers and doctors.

The state is making a temporary payment to Missouri’s roughly 2,400 childcare centers receiving subsidies. Jennifer Tidball, acting director of the Missouri Department of Social Services, says the decision is in response to many providers being closed during the coronavirus outbreak.

“We will be making a temporary payment through our Department of Social Services childcare subsidy payments to ensure that providers receive no less amount for March services or services through the emergency timeframe than what they received as an average payment for December, January and February,” she says at today’s press briefing.

Tidball wants providers to pass on some of the funding to their workers to help maintain their employment when the businesses reopen. 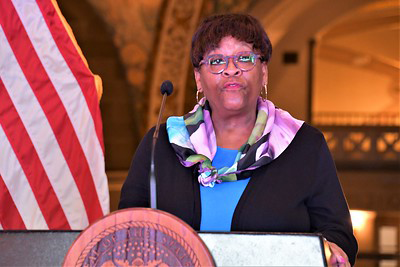 Meanwhile, Missouri is letting doctors and surgeons licensed in other states care for patients here in person or through telehealth options during the pandemic. Department of Commerce and Insurance Director Chlora Lindley-Myers says the decision applies to those who have not had their active licenses disciplined.

“By having this access granted to additional providers, we increase our ability to meet the needs of Missouri patients who are being tested and treated for COVID-19,” she says.

Missouri RNs and LPN’s are already allowed to practice in person or through telehealth in their home state and 32 other states.

Effective immediately, Parson has also temporarily waived the regulation requiring that a collaborating physician and an advanced practice registered nurse be within 75 miles of each other.

You can watch the entire briefing is below.

A major insurance company says more than 3,100 insurance claims have already been processed in Missouri, from this weekend’s hail storm and severe weather. 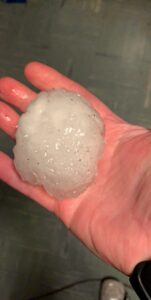 Jefferson City received some of the heaviest damage from the March 27, 2020 hail storm (photo courtesy of the Missouri Limestone Producers Association)

State Farm spokesman Chris Pilcic tells Missourinet that a drone team should be active this week, along with an automobile tent in Jefferson City. The tent will be by appointment only.

The state Department of Commerce and Insurance is requesting that Missourians who have insurance questions or concerns call the department’s Insurance Consumer Hotline.

She advises you to make temporary repairs to prevent further damage. She also recommends not making permanent repairs until your insurance company has inspected your damage.

Director Lindley-Myers also reminds you to watch the repair contractors who inspect your property. The department says unscrupulous companies will cause damage, to increase the repair cost.

Here is the video from Missouri Governor Mike Parson’s press briefing at the State Capitol in Jefferson City about coronavirus. It took place on Monday March 23, 2020. Governor Parson was joined by state Department of Public Safety Director Sandy Karsten, Office of Administration Commissioner Sarah Steelman, and state Department of Commerce and Insurance Director Chlora Lindley-Myers. The briefing was virtual-only, in accordance with the governor’s COVID-19 directive: