You are here: Home / Archives for Missouri Chamber

The state Chamber says a bill that will make it harder to get unemployment benefits will benefit both employees and employers.

The bill changes the definition of “misconduct” in relation to employment, so that it is harder for people to get unemployment benefits after doing things like violating an employer’s rules or even state standards that could get an employer in trouble.

Lawmakers backing the bill gave examples during debate including employees who urinated off of buildings or fell asleep on the job, yet were still able to draw benefits, and said the bill is needed to keep such things from happening again.

“I think this is a common sense first step in what we need to do to try to shore up the unemployment trust fund and the system that’s out there,” says King, “so that it is out there for the people who truly need it.”

King says it was a series of compromises that led to Governor Jay Nixon (D) allowing the bill to become law this year, after vetoing similar legislation the past three years.

“There was some opposition with the Missouri Association of Trial Attorneys last year. We worked with them on trying to compromise on this legislation, as well as the unions,” says King. “We felt like we found common ground.

“The Governor vetoed a similar provision last year and in that veto message he stated that he needed some additional language in order for us to be in compliance with the U.S. Department of Labor. We included that this year.”

Missouri is one of 14 states in which employers will be paying more next year for unemployment insurance, and the Missouri Chamber says that increase will add up. 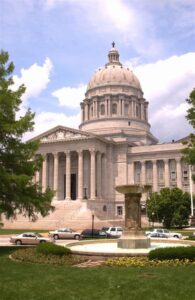 Missouri borrowed federal dollars in 2008 to pay unemployment benefits the state couldn’t cover. That debt hasn’t been paid, and so the state’s employers are losing tax credits that counted toward what they pay for unemployment insurance. That translates to an increase in what employers pay per employee from $42 to $63.

Missouri Chamber Director of Legislative Affairs Brendan Cossette says that only sounds like it’s not a lot.

“When you look at the total amount that is coming for all employers throughout the state or for large employeers … those are real dollars. That’s a significant amount of money and it’s certainly something that all of the accountants and CPAs throughout the business world have taken notice of.”

One way the Chamber and some lawmakers have sought to pay the debt down faster is through legislation. Cossette says HB 611 in this year’s legislative session was one such attempt but it was vetoed and the House could not get the votes to override that veto.

“(Legislators) were hoping to remedy the situation, at least partially,” Cossette explains, “by changing the defenition of ‘misconduct,’ which in turn would reduce the amount of people that are getting unemployment benefits if they had been discharged because of misconduct, and the fewer people that get benefits, the more likely this is going to be paid off quicker.”

Cossette cites an example of a person being let go from work for failing a drug test but still getting unemployment benefits.

“Every time that happens,” says Cossette, “that’s fewer dollars that are in the trust fund that can either go to repay this or go to pay for those who have legitimate claims.”

Cossette says another possible solution has been used in other states, and it involves bonding.

“Basically the employers have used the state as a mechanism to bond to pay off that debt in one fell swoop, and then to pay for the bond has been an assessment on employers but it’s less than what they owe on the surcharge.”

Cossette expects to see both the bonding concept and language similar to that of HB 611 pursued in the 2014 legislative session.