Governor Mike Parson approved the new fiscal year 2021 budget bills totaling about $35.3 billion and vetoed 17 line items amounting to $11 million. However, continued revenue shortfalls expected because of the COVID-19 crisis have prompted him to block spending on $448 million in the budget, unless the economy gets healthier.

Schools and higher education took the brunt of singular cuts, though employee layoffs will be mainly in the mental health and social services agencies.

At Thursday’s regular briefing, Missouri Treasurer Scott Fitzpatrick gave an update on the work of the special working group appointed by the governor to make spending suggestions for federal COVID-19 stimulus funds.

Parson talked about the seriousness of the state’s COVID-19 death toll, now at one thousand. State Health Director Randall Williams intensified his call for wearing of masks in certain situations” “the more we learn the more important we realize that is.”

A bipartisan team of lawmakers, agency chiefs, and other advisors is helping Gov. Mike Parson to stay on top of massive amounts of federal money coming into Missouri for coping with COVID-19.

The working group appointed by the governor made its first major move Tuesday to clear $500 million in CARES Act funding to be spread out among counties and St. Louis City. View the allocations by county. 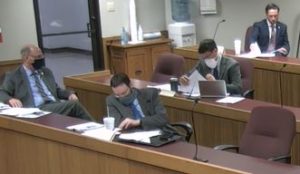 State Treasurer Scott Fitzpatrick chairs the group and says he has been preparing the counties to get this money.

“This is a lot of money. We’re going to get $521 million that for some counties represents a substantial portion of their operating budget for an entire year. The expectation I have tried to set in the conversations I have had, that they administer grants to other local government entities, whether it be their health departments, ambulance district or hospital district that has costs that have not been reimbursed from another source,” Fitzpatrick explained.

The checks could get to the counties about a week from today if the governor approves the spending.

Tuesday’s first meeting of the group also dealt with applying federal guidelines and a very general overview of state spending on coronavirus response — from public safety to testing. The CARES federal funding must be applied to direct costs from dealing with COVID-19 after March 1, 2020 and prior to December 30, 2020.

Though the $6.2 billion state supplemental budget serves as a guide for those allocations, members agree the challenge is discerning which agencies and businesses need the help and are not “double-dipping” with other aid coming directly from non-CARES Act aid.

“Things are changing pretty quickly,” said State Budget Director Dan Haug. He says he learned today that DESE is getting a separate $117 million for meals to schools.

“Things are still rolling in as we speak. We want to take a global look at this so that if they are getting $117 for meals then maybe we don’t need to provide money for meals and we can use that money more effectively somewhere else,” Haug said.

Haug says his division will provide the group with an accounting of all of the money coming into Missouri outside of the state budget, for instance, the recent relief to hospitals that came directly from the U.S. Department of Health and Human Services.

Missouri’s budget director testified Sunday in Jefferson City that he expects federal guidance early this week on what the Show-Me State can spend its coronavirus funding on. 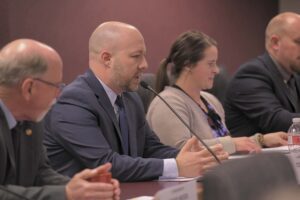 “Right now we do know that a portion of it (federal funding) will be passed through to the local health agencies,” Haug testifies. “We know that it can be used for for testing, laboratory services.”

Haug testified before the Budget Committee, during a marathon Sunday hearing that lasted into early Monday morning.

It’s rare for the House Budget Committee, or any legislative committee, to meet on a Sunday. House Speaker Elijah Haahr, R-Springfield, says the aim is for the full House to approve the state operating budget on Wednesday, with final House approval expected Thursday.

House members would then leave Jefferson City for their already-scheduled spring break, and the Missouri Capitol will be thoroughly cleaned at that time.

State health officials have confirmed Missouri’s fifth case of COVID-19, which is travel-related and involves a resident in southwest Missouri’s Greene County.

House Budget Committee Chairman Cody Smith, R-Carthage, does not expect the state to have to tap into the “Rainy Day Fund” for the coronavirus. He notes the at least $13 million heading to the state is federal funding, part of an emergency $8.3 billion package signed this month by President Donald Trump.

“So we as a General Assembly are well-situated as we work through the process to be responsive to this, and we feel like the resources made available this time are a good start,” says Smith.

Lawmakers also learned Sunday that Governor Parson’s state of emergency declaration will also provide access to an additional $7 million, on top of the $13-million mark.