You are here: Home / Archives for Missouri Broadband Development Office

A new report says Missouri ranks 32nd in the nation in broadband internet access – a positive step from 41st just a couple years ago. Federal and state aid have helped to boost access around Missouri.

The report says 23% of Missouri students still do not have access to high-speed internet. Plus, it says the state ranks in the bottom five for access to low-cost internet. 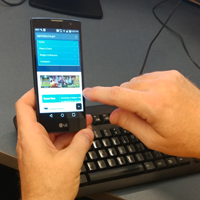 During a state Board of Education meeting Tuesday, Tim Arbeiter, state Director of Missouri’s Broadband Development Office, said there is still a lot of work to do.

“Within the next three years, I think we could probably cut our divide in half. But I still think we are going to have challenges ahead of us in the affordability space. As I listen to my colleagues across the state, when affordability programs are active and live, there is still some hesitancy from populations to hook on. We don’t know the aspects and the why to that. So, we need to understand that little piece a little bit better,” said Arbeiter.

Rob Dixon, the director of the state Department of Economic Development, said Missouri’s economy will not grow without continuing to boost broadband access.

“It’s a key plank in our overall economic development strategy,” says Dixon. “The big question of is it an affordability issue or is it an access issue or is it a device issue. The answer is yes on all of those things. And so, it is a pretty challenging issue all around.”

He said data shows Missouri is a mixed bag in its state of broadband.

“The bottom line message I think that we have is there is still very much a gap that we are trying to close, but we are moving in that right direction. We’re still on the wrong side of that list but we are moving forward. It’s a difficult issue to talk about kind of in a positive way because there is still such a big gap that we are trying to close. I think that’s why there’s so much urgency around this issue,” says Dixon.

Board member Pamela Westbrooks-Hodge of Pasadena Hills said some individuals in the corporate community want to help.

“Maybe where they plug in and play is with these short-term actions,” she said.

Members talked about broadband coverage being spotty from house to house. During the pandemic, some communities have set up portable wifi connections for students to access internet from a building or a parked bus, for instance.

“A lot of homework being done at the McDonalds,” said Board President Charlie Shields of St. Joseph.

Missouri’s governor announced a $50 million dollar project to expand broadband across the state, during a Thursday media briefing at the Statehouse in Jefferson City. 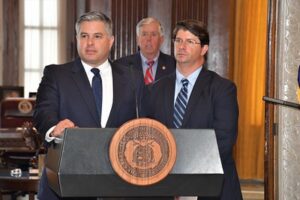 The expansion will include support for telehealth and libraries. Governor Mike Parson says the money will come from federal CARES Act funding. He says broadband is critical for Missourians.

“The digital divide in rural Missouri limits growth in many sectors of our economy, including education, workforce development, health care, business retention and attractions, just to name a few,” Parson says.

Parson says the project earmarks $20 million to establish a reimbursement program for broadband providers, to assist them with construction costs for new broadband expansion to households with students or vulnerable populations.

The governor was joined at the briefing by state Department of Economic Development (DED) Director Rob Dixon and state broadband development office director Tim Arbeiter. Arbeiter’s office is within DED.

Director Dixon says the project to expand broadband will help thousands of Missourians go to school, work and to the doctor. He tells Capitol reporters that today, “broadband internet is the backbone of a resilient economy.”

Under the project, the state Department of Elementary and Secondary Education (DESE) will provide $10 million to local education agencies, to seek reimbursement for eligible costs to increase student connectivity.

Arbeiter says the project will also provide $5.25 million for telehealth.

“It was estimated just over 90,000 Missouri citizens could not access medical care during this time. It’s a continued issue that, again as we faced with the pandemic, facilities closed down,” Arbeiter says.

The $5.25 million will support connectivity for telehealth services for vulnerable populations. The state will partner with the Missouri Telehealth Network at Mizzou to secure about 12,000 hotspots for the state’s 29 federally qualified health centers and the 26 community mental health centers.