You are here: Home / Archives for Missouri Baptist 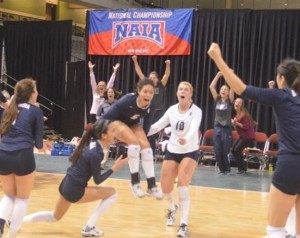 Congratulations to the Columbia College volleyball team for claiming their fourth NAIA national title and first since 2001, when the Cougars beat Missouri Baptist 3-0 (28-26, 25-16, and 25-21), in Sioux City Iowa.

It was the fourth meeting this season between the two Missouri schools.

The Spartans advanced to the National Championship match for the first time in school history after defeating Viterbo University Saturday morning 3-0 in the semifinal round.

“We worked all year to overcome a lot of things,” said Columbia head coach Melinda Wrye-Washington to ColumbiaCougars.com. “We went through a lot of peaks and valleys, a lot of roller coaster rides, through injuries and sickness to make it here tonight. This group persisted, they never gave up on each other. Their character in practice and the ability to invest in everything they did, physically, mentally and emotionally and invest in their training and have the character to persist through everything that happened to them over the season has just been amazing.” 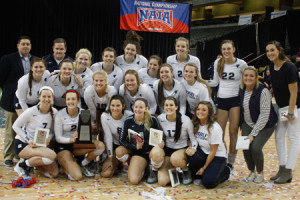 The Spartans made their first ever national title appearance (photo/mbuspartans.com)

Two Spartans were named to the All-Tournament team: Mallory Dillon and Haley Pouliezos. Pouliezos was also named the NAIA Libero of the Year for the second year in a row. 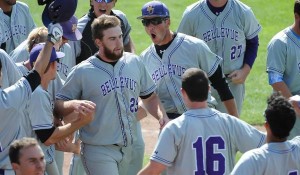 The William Woods Owls were one strike away from winning on Bellevue, Nebraska’s home field, but Bruins  sophomore first baseman Todd Nicks launched a three-run homer off of reliever James Ball in the top of the ninth inning to give Bellevue  a thrilling 3-2 comeback win over William Woods Tuesday afternoon in the NAIA Baseball National Championship Opening Round at Don Roddy Field, in Bellevue. 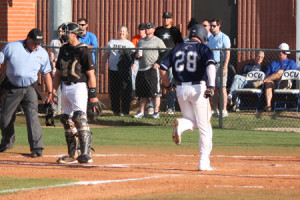 Missouri Baptist held a two-run lead twice on Tuesday against Dakota Wesleyan, S.D. in the Opening Round of the NAIA Baseball National Championship. The Spartans posted four runs in the eighth and held the Tigers scoreless in the bottom-half of the final two innings to post a 6-4 win in the first game of the tournament in Oklahoma City, OK.

In their second game of the day, the Spartans were held off the scoreboard for 10 innings, but found a way to take down the number one in the country.  MBU loaded the bases and recorded a walk-off win on a hit batsman in the bottom of the 13th inning to advance in the winner’s bracket with a win over Oklahoma City, 5-4. 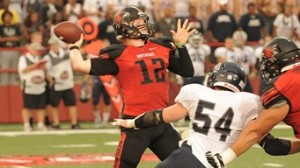 SEMO QB Kyle Snyder threw for 198 yards and two touchdowns, and rushed for two TDs in the Redhawks win over Missouri Baptist (photo/GoSoutheast.com)

Southeast Missouri State began the Tom Matukewicz era with a 77-0 rout of Missouri Baptist Thursday night in front of a crowd of 7,143 at Houck Stadium in Cape Girardeau.

The 77 points were the most Southeast scored in a game during its NCAA Division I Football Championship Subdivision tenure. The last time the Redhawks scored over 70 points was in a 72-3 victory over Quincy in their 2009 season-opener. 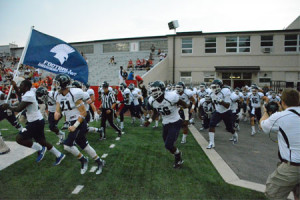 Missouri Baptist takes the field for the first time in football (photo/mbuspartans.com)

“I was proud of our team and I thought we played well,” said Matukewicz. “It was a great atmosphere tonight and awesome energy. Overall, I liked our execution.”

“Even though the game was out of hand, we never quit fighting,” said Head Coach Jason Burianek. “We gave them as much as we could and I couldn’t be more proud of them.”

Southeast had 17 returning starters, 19 seniors and four Football Bowl Subdivision transfers on the 2014 squad. Missouri Baptist, on the other hand, had 61 freshman on the roster. 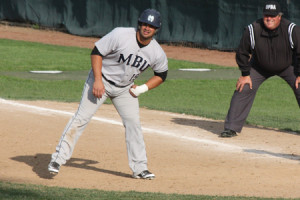 Third-seeded Cumberland (Tenn.) opened a 3-0 lead after two innings, and got past top-seeded Missouri Baptist, 6-4, on Wednesday afternoon in the 2014 NAIA Baseball National Championship Opening Round – Kingsport, TN Bracket.  With the win, the Bulldogs (now 43-19 on the year) force a winner take all bracket championship game Thursday afternoon at 12 noon (weather permitting) with the Spartans. Missouri Baptist fell to 47-13 with the loss.

In the first, Cumberland took advantage of a Missouri Baptist fielding error, scoring a run on a Sam Lind RBI sacrifice fly to go up 1-0. In the second, the Bulldogs used a two-out rally to plate two more runs, as Chris Hall laced a two-RBI single up the middle to give Cumberland a three-run lead after two innings.

Missouri Baptist cut the Cumberland lead down to a single run in the top of the third with two runs, making it a 3-2 game, but that was the closest the Spartans got to the lead all game. In the sixth, Cumberland put the game away, scoring three runs (all with two outs) to go up 6-2.

MBU scored twice in the seventh to cut the Cumberland lead down to two runs, but that was the last time the Spartans made a run at the lead the rest of the game. In the ninth, Bulldog pitcher Clint Meadows finished off a complete game victory, lifting the Bulldogs to the two-run win.  Missouri Baptist was led in the loss by Orlando Olivera, who went 3-for-4 with two RBI. Starting pitcher Michael Yarborough (10-1) was tabbed with the loss for the Spartans on the mound. 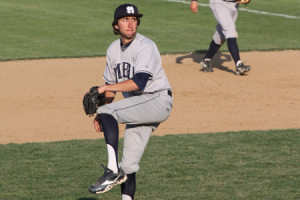 No. 5 seed Culver-Stockton (Mo.) gave top-seeded Missouri Baptist all it could handle, but in the end, the Spartans pulled out an 11-10 win in the third game of the NAIA Baseball National Championship Opening Round in the Kingsport, TN Bracket.

With the win, Missouri Baptist (46-12 overall) advances to face No. 3 seed Cumberland (Tenn.) on Tuesday at 2:30 p.m. Meanwhile, Culver-Stockton (30-27 overall) plays at 6 p.m. Tuesday against the winner of the Bryan and Brewton-Parker elimination game at 11 a.m. on Tuesday.

In the ninth, the Spartans had two on with one out when Jeff Smith doubled to push the go-ahead run across. Culver-Stockton got two runners on with two outs in the bottom of the inning, but a flyout to center ended the threat.

Two solo homers in the first gave Lee a 2-0 lead and they opened the game up in the fifth scoring five times to grab a 7-0 lead. Four more in the sixth pushed Lee to an 11-0 lead.  The Spartans scored their first run of the game when Ryan Gunhouse tripled to bring home Patrick Johnson, who had reached earlier on a single. Lee tacked one more and Missouri Baptist scored a solo run in the top of the eighth.

Missouri Baptist outfielder Ryan Gunhouse slapped a single over the head of the Rogers State (Okla.) third baseman to score Patrick Johnson for second base, as the No. 9 Spartans rallied to knock off the defending national runner-up and tenth seeded Hillcats, 5-4, Monday afternoon in game nine of the 2013 NAIA Baseball World Series at Harris Field. With the win, Missouri Baptist (37-13), who is making its first appearance at the World Series, advances to play No. 2 Lee (Tenn.) at 5 p.m. CDT on Tuesday. Rogers State (36-24) is eliminated from the championship.

Johnson, the American Midwest Conference Player of the Year, picked the perfect time to extend his hitting streak to eight games as the senior shortstop beat out a dribbler to first base for an infield single and advanced to second when the Rogers State first baseman threw it over the head of the covering pitcher to start the ninth. Gunhouse wasted no time driving in Johnson with a single on the next pitch.

Matt Marsh threw three innings of scoreless relief to earn the win and improve to 3-4 on the season. Marsh has now thrown four innings, allowed no runs and only two hits at this year’s World Series.  Missouri Baptist catcher Garrett Vail extended his hitting streak to nine games and finished 1-for-4.

For the first time in Missouri Baptist University baseball history, the Spartans will play in the NAIA World Series after beating the defending national champion, Tennessee Wesleyan, in a 19-inning marathon on Monday afternoon, 4-3.  With their win in the championship game of the Kingsport Bracket, the Spartans will move onto Lewiston, ID., for bracket play from May 24-31. Missouri Baptist’s 19-inning victory was the longest in NAIA National Championship Opening Round history.

In the top of the 19th, with bases loaded and one out, Garrett Vail hit a sacrifice fly to score what became the game-winning run. Missouri Baptist’s Matt Marsh closed the game out after tossing a season-high six innings in relief.

The Spartans will open play at 9 a.m. on Friday the 24th against Sterling, KS.

Missouri Baptist lost in the regional finals to Lee University in the Cleveland, TN regional in the opening round of the NAIA World Series Baseball Tournament by the final score of 8-5.

Lee went right to work in the opening inning. With one out Blake Barber, who finished the day with two hits, singled and Roberto Reyes reached on a throwing error. Barber raced all the way to third and scored on a sacrifice fly by Corey Davis, who was the only other Flames with two hits in the nine-hit attack. After Mike Moore singled, Trevor Burgess drove home Reyes with a one-base knock. It was the seventh hit in five games for Burgess, who also finished the series with four RBI and five runs scored.

END_OF_DOCUMENT_TOKEN_TO_BE_REPLACED

Lee (53-9-1) advanced to Saturday evening’s contest with a 13-0 win over Avila University (Mo.), in the afternoon game. The Flames and Missouri Baptist will now return for a winner-take-all championship, Monday at 1 p.m., for a trip to the NAIA World Series in Lewiston, Idaho.

Lee struggled to get to Missouri Baptist starter Julien Soucy (6-3) the entire evening, scratching just a single run in the seventh on a sacrifice fly scoring Trevor Burgess, following a triple.  After loading the bases in the ninth, the Spartans went to the bullpen, but to no avail as the Flames hit a pair of RBI singles and a sacrifice fly by Jorge Saez to score the winning run.

Matt Passauer was the solid on the mound for the Flames, throwing 3 2/3 innings of no-hit relief to keep the Flames in the contest. The senior moves to 2-0 with the shut-down performance. Burgess and Edmanuel Rivera each had a pair of hits in the win, as the Flames totaled eight. Rivera tallied a pair of RBI, with Burgess scoring once and knocking in one run.