You are here: Home / Archives for Missouri automotive suppliers 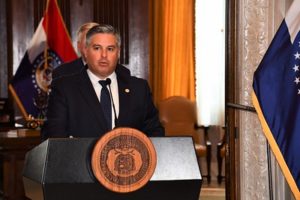 In July, the company said it planned to temporarily eliminate its third shift, due to COVID-19. The “St. Louis Post-Dispatch” reported in July that the United Auto Workers (UAW) said 23 plant employees had the coronavirus.

State Department of Economic Development (DED) Director Rob Dixon told Missourinet on Monday that GM’s Wentzville plant has been able to keep its third shift, despite earlier plans to the contrary.

Dixon says the issue was related to concerns about absenteeism, due to the pandemic. He says General Motors is able to keep the shift open with workers from other plants.

“This is obviously good news, but it certainly highlights the challenges we continue to face as a result of COVID-19,” Dixon says.

He also reiterates what he told Capitol reporters in mid-July: that the company still plans to invest about $1.5 billion into the plant, which produces the GMC Canyon and the Chevrolet Colorado.