You are here: Home / Archives for MFA Oil Company

The Missouri Senate leader will file legislation in December in Jefferson City to increase penalties for alleged illegal slot machines, setting the slot machine issue up as a major one for the 2020 legislative session. 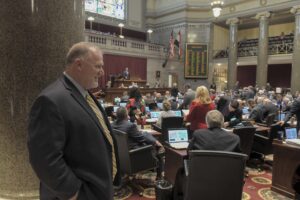 Senate President Pro Tem Dave Schatz, R-Sullivan, told Missourinet on Wednesday that his legislation will enhance the penalties for the alleged illegal slot machines, which are also known as video lottery terminals (VLTs).

They can be found in bars, restaurants, gas stations and convenience stores.

Pro Tem Schatz says the Missouri Gaming Commission has received multiple reports of sites that have these machines. The Missouri State Highway Patrol testified in October that the number of complaints it’s received about illegal gambling has increased from 39 in 2018 to at least 145 this year.

Most of those complaints are about alleged illegal slots.

A Missouri House gaming committee has held five hearings since August, and the slot machine issue has dominated discussion at three of them. House Special Interim Committee on Gaming Chairman Dan Shaul, R-Imperial, predicts the slot machine issue will end up at the Missouri Supreme Court. He told the audience during an October hearing that whichever side loses the Platte County case will appeal.

Schatz’s proposal will likely face some opposition. During a committee hearing last week in Jefferson City, representatives from convenience stories and restaurants testified they support legislation to allow the machines in their establishments.

MFA Oil Company vice president James Greer of Columbia tells state lawmakers that Break Time would probably use the terminals in 25 of their 74 stores, if Missouri lawmakers approve legislation to do so.

“In documents I have seen, the average restaurant in Illinois that has five video game machines can average additional revenue of approximately $5,000 per month,” Marshall testifies.

But opponents say the machines are illegal and are hurting public education.

The Missouri Gaming Association, which represents the state’s 13 casinos, opposes legalizing the VLTs, saying they are illegal and bypass Missouri voters.

And the Missouri Lottery has testified that alleged illegal slot machines are hurting public education in the Show-Me State. Lottery executive director May Scheve Reardon testified in September, telling lawmakers there’s a major issue with the alleged illegal slots along the I-44 corridor, from St. James to Lebanon.