You are here: Home / Archives for mega vaccination site

Missouri’s governor announced Thursday in Jefferson City that the state will be hosting a mega vaccination site at Kansas City’s Arrowhead Stadium next Friday and Saturday, March 19 and 20th. 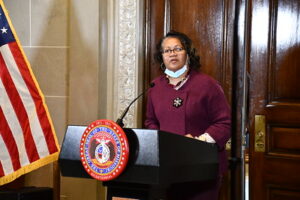 Governor Mike Parson tells Capitol reporters that his administration is working as quickly as possible to meet the higher vaccine interest in urban populations, while keeping vaccine distribution equitable across the state.

“Two (Missouri) National Guard teams will be on the grounds Friday and Saturday (March 19 and 20) from 9 a.m. to 7 p.m. to vaccinate an expected total of six to 7,000 eligible Missourians,” Parson says.

The COVID vaccinations will be administered in Arrowhead Stadium’s parking lot, and not on the Chiefs football field.

“Names of the eligible Missourians will be chosen from a list of those who have previously signed up to receive the vaccine with the Jackson County health department,” says Parson.

The governor says those selected will be notified of their appointment date and time, along with further instructions.

Washington says organizers are working with the Urban League and are also reaching out to the most vulnerable. She notes you must have an appointment.

Senator Washington, who serves on the Senate Health and Pensions Committee, says tents will be set up in Arrowhead Stadium’s parking lot, and says nurses will administer some shots on buses.

During the Statehouse press conference, Governor Parson also discussed COVID numbers and says we are winning the fight against COVID. The governor says the numbers continue to trend in the right direction, and he’s emphasizing the state’s balanced approach.

“Missouri is still leading the nation at second-lowest of average daily cases. Our seven-day (COVID) positivity is 4.5, and hospitalizations have dropped below 900,” Parson says.