You are here: Home / Archives for Mark Twain National Forest 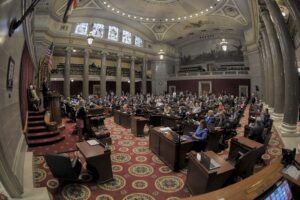 Mark Twain National Forest in a press release, issued operations changes for the safety of visitors and employees, yet still serve the public.

Click here for the most up-to-date Forest Recreation information.

Offices will be assisting customers virtually; multiple recreation sites have been temporarily shut down, and services have been reduced at many more sites for the health and safety of visitors and staff.  All these actions will strongly promote social distancing on the Forest.  Although these changes may seem out of the ordinary, they are in line with current national guidance and with what other agencies across Missouri are doing to help reduce opportunities for the spread of COVID-19.

All Mark Twain National Forest offices have implemented virtual services and shut their doors to protect the health and safety of employees and members of the public during the COVID-19 outbreak in accordance with guidance from federal and state authorities.  Visitors are encouraged to contact their local forest or ranger district www.fs.usda.gov/detail/mtnf/about-forest/offices for the latest office hours and availability.

REDUCED SERVICES
Restrooms have been locked at most of our recreation sites.  Other services, like access to pavilions and places where many people traditionally gather, may be temporarily suspended as well.

Mark Twain National Forest continues to monitor the COVID-19 situation and evaluate potential impacts and adjustments to reservations and our reservation policies through Recreation.gov.

Reservation holders will be notified via email and/or cell phone text messages if there are any changes affecting their reservation. In the event of delayed openings of some, part or all of our recreation facilities, to ensure safe social distancing, you will receive a full refund for your reservation. Please remember to review current recommendations from the Centers for Disease Control and Prevention and focus on recreating safely while protecting yourself, Forest Service employees and our volunteers.

As we work through this unpredictable and rapidly changing situation, health and safety will remain our number one priority. We are committed to continuing to support our communities and fulfill our mission as we all work together to minimize the impacts and spread of COVID-19.  As changes occur, Mark Twain National Forest will continue to update the public.

Two southern Missouri state lawmakers are unhappy with a letter the state Department of Agriculture (MDA) director has sent to the U.S. Forest Service, in support of their decision to close the Mark Twain National Forest to feral hog hunting. 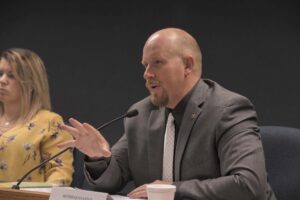 Chinn testifies that Oklahoma has gone away from an approach Missouri was using, including hunting.

“One of the things that we learned from them (Oklahoma) is that, that above-all approach that we had been taking, they had tried as well and it didn’t work,” Chinn tells Representative Ross.

“Especially not when your (Missouri) Department of Conservation is actively working against the private landowners,” Ross responded.

The above-all approach that Director Chinn is referring to is a policy that some hunters and ranchers near the Mark Twain National Forest want to continue. It involved trapping by Conservation officials, but also hunting by residents.

Ross, who chairs the House Special Committee on Government Oversight, serves on the Budget Committee. He questions Chinn’s letter.

“That’s what really surprised me is that your agency (MDA) would take a position that was in directly in opposition of working with the private landowners, following along with the misguided approach the Missouri Department of Conservation is now pushing,” Ross tells Director Chinn.

Ross says his Texas County constituents support eradicating feral hogs, by hunting. He and Cupps say residents should be allowed to hunt for the hogs on public land.

The Conservation Department has launched a new plan, which aims to eliminate feral hog damage by trapping and killing the hogs themselves.

Chinn testifies that MDA’s job, through its Animal Health division, is to protect Missouri from diseases. She says if African swine fever were to hit Missouri through the feral hog population, it would be a threat to livestock producers and agribusiness.

“A lot of these livestock eat the corn and the soybean that are raised on many of these farms, and if we should have a disease threat like that hit Missouri, it’s not only going to hurt the livestock industry, it’s going to hit our row crop as well as our grain elevators,” Chinn testifies.

After several minutes of questioning, State Rep. Hannah Kelly, R-Mountain Grove, who chairs the House Subcommittee on Appropriations for Agriculture, asked Ross and Cupps to save the feral hog discussion for another date, when both MDA and the Conservation Department can attend. Kelly wanted Chinn to have time to present her budget.

The issue has been a big one at the Missouri Capitol. Just last week, about 150 southern Missouri hunters and ranchers protested quietly outside the governor’s office, saying the MDC-federal approach won’t work.

Click here to listen to Brian Hauswirth’s interview with Missouri Department of Agriculture (MDA) Director Chris Chinn, which was recorded at the Missouri Capitol in Jefferson City on January 27, 2020:

The federal government has closed Mark Twain National Forest to hunters of feral hogs – at the same time, Missouri’s Department of Conservation has launched a new plan in 2020 to try to eliminate feral hog damage by trapping and killing hogs themselves. They are trying to help landowners and farmers who have had property and cropland torn up. The MDC says a social group of ten hogs can destroy 10-20 acres overnight. MDC website 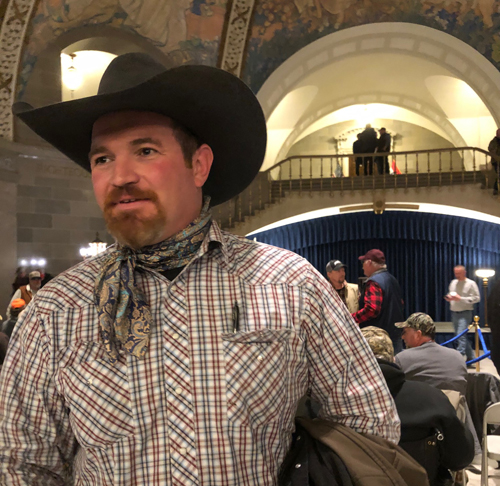 Bell of Summersville joined about 150 at the Missouri Capitol to speak to lawmakers about hunting rights.

But that approach is not sitting well with some hunters and ranchers who want to hunt the hogs themselves.  Dustin Bell is from Summersville, at the edge of the Mark Twain National Forest.

“We think it takes an all-effort, everybody combined, hunters, trappers whatever it takes to control these hogs to prevent them from further damage on our land around for our friends and neighbors and we think that it’s absolutely unrealistic that they can trap all of them out and eradicate the hogs and we think it’s just an overreach of power by MDC,” Bell told Missourinet.

About 150 gathered in a quiet petition signing and protest outside the governor’s office at the state capitol Wednesday, saying the MDC-Federal approach won’t work.

“We actually encouraged people to hunt feral hogs for several years and that didn’t work,” Jensen said in an interview with Brownfield Ag News. “What we saw during that period of time was that numbers exponentially increased and the range of feral hogs increased. We feel that was mostly due to illegal releases by people who were wanting to hunt feral hogs for that recreational value.”

The department is considering increasing enforcement in some areas so that more of the animals are not released behind MDC staff as they trap hogs.

Bell and the protestors disagree, insisting that hog hunting on public land should not be a crime, but a part of the solution.

“It is our land, taxpayers lands and not MDC’s land. We thoroughly believe that we have the right to ride horses, everything. We should not have to have a permit to ride horses, or hunt hogs or whatever it is.”

The Conservation Department says Missouri has had feral hogs since the 1990’s – and the population has grown. Their trappers disposed of more than 10,000 last year.

The National Weather Service (NWS) says an EF-0 tornado touched down Saturday night in southwest Missouri’s Polk County, near Fair Play. There were no reports of injuries. 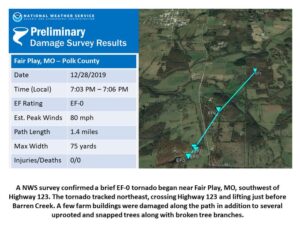 NWS Springfield meteorologist Mark Burchfield tells Missourinet the tornado was on the ground for about three minutes, with estimated peak winds of 80 miles per hour.

“There was some damage to some farm buildings along with some trees that were uprooted and snapped,” Burchfield says.

Meantime, the NWS says the storm damage done Saturday evening near the Missouri-Arkansas border was done by straight-line winds, not a tornado. Mr. Burchfield says NWS survey teams have been in southern Missouri’s Taney and Ozark counties today (Monday).

“There was also some uprooted trees and a little bit of other damage there, it looked like to maybe a parked tractor trailer unit that was parked that got moved a little bit,” says Burchfield.

He says the straight-line winds impacted the small towns of Rueter, Protem and Theodosia, near the Mark Twain National Forest.