You are here: Home / Archives for Margo McNeil

The House has given first round approval to a proposal that would bar enforcement of the federal Affordable Care Act, and makes it a crime to try to enact any portion of it in Missouri. House Democrats found a number of reasons to oppose the bill.

Bahr concedes, “We are still waiting on the Supreme Court to make their final decision on the constitutionality of the Accordable Care Act.”

Representative Margo McNeil (D-Florissant) says the state should allow the ACA to stand, for all the ways it will benefit Missourians. When Bahr restates his assessment that the Act is unconstitutional, she questions how he comes to that conclusion. “According to the representative from the 19th District (Bahr)?”

House Democrats also say Missouri has no power to resist the Act if it becomes law. Representative Chris Kelly (D-Columbia) says the bill oversteps the legislature’s authority. “Just because you don’t like the federal law, and it’s somebody else’s job to find whether it’s constitutional or not, does not give us the power to leap way, way out of our obligations. This is the antithesis of limited government.”

Kelly summed up his feelings about Bahr’s proposal, “This is breathtaking in its contempt for the Constitution of the United States.”

The bill was perfected 109-41 on a roll call vote. Another positive vote would send it to the Senate.

The House has approved a proposal to make it easier for students who face a long bus ride to school to change districts.  Some oppose the bill, calling it a first step toward open enrollment. 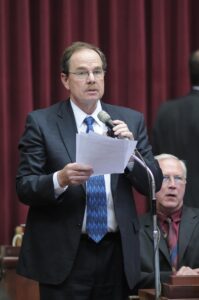 It would require the Commissioner of Education to reassign students to a different district if their drive to school takes too long, goes too far or has to go around natural barriers, if certain conditions are met.

Some lawmakers, like Margo McNeil (D-Florissant), said the bill leads down a path they don’t want to take. “This is a defacto open enrollment bill, and I don’t know that we are ready to go there yet.”

McNeil says there is already a process in place to apply for hardship transfers. “It takes a while, but it works.”

The measure’s sponsor, Representative Rodney Schad (R-Versailles), disagrees that the process works. He says those applications go before board of arbitrations made up of current or retired school administrators that always deny the applications.

Schad’s proposal requires the Commissioner to approve applications when the driving distance from a students residents to his or her home district is ten miles or more, but another district’s school is at least five miles closer. The transfer can not put the receiving school’s classroom over the number of students per class set by school improvement standards.

The bill also removes language in statute that an application can be denied if it will result in “educational harm.” Schad says that term is not defined.

Schad also disputes the claim that the legislation is a step toward open enrollment, and says he does not support that concept.

Representative Jay Barnes (R-Jefferson City) reminded his colleagues of what parents said in a committee hearing.

“We heard testimony from a parent whose child had accidents on the way to and from school that left them subject to ridicule from other kids because the bus ride was so long. We heard another parent testify that the roads and the length of the travel required to get to the school were so difficult and the roads were so dangerous that he was afraid every single day that his children left on the bus to go to school.”

Barnes accused opponents of the plan of putting school administrators ahead of children. “It seems that arbitrary geographical boundaries, to the opposition, have more importance the vast, detrimental effect of one hour trips each way to school have on children.”

The bill narrowly passed, 85-72 and now goes to the Senate for consideration.