You are here: Home / Archives for Mamtek

His is testimony that has been sought for months, and at last legislators expect to hear it.

Patent attorney Michael Wise is scheduled to testify before the House Committee on Government Oversight and Accountability at its hearing on Thursday. In December, Department of Economic Development representatives told the Committee that it was Wise who in a phone conversation told Moberly officials he had been to a Mamtek production facility in China. Wise was said to have claimed he visited the facility in-person more than once and to have obtained product made there. 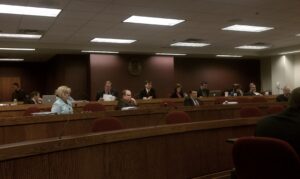 The House Committee on Governmental Oversight and Accountability will continue meeting through the 2012 regular session.

Wise’s claims were part of the basis for Moberly officials proceeding with the Mamtek project that has since collapsed and become the subject of multiple investigations.

Chairman, Representative Jay Barnes (R-Jefferson City) said in December he had already been trying to get Wise before the Committee for over a month. Now, he’s anxious to hear what the man has to say. “‘What did Michael Wise see in China?’ is the big question for next week.”

That could also be one of the last questions the Committee asks before moving on to another phase. “We’ve had a lot of hearings. We’ve heard a lot of testimony. I think we have a pretty good picture of what happened. Next week’s testimony I think completes our picture.

Barnes says after the Thursday hearing, the body might shift focus from investigating the facts of Mamtek to dealing with legislation stemming from those facts. It is for that task that it went from being an “interim” basis to a standing special committee. “We’re going to be assigned bills relating to this topic and so we’re gonna be in existence until the end of session.”

Some such legislation has been filed, while the chairman says he and others are developing more. “Stay tuned,” Barnes suggests.

Read about one bill filed in relation to the Mamtek investigation.

He says he will talk to other Committee members about whether there is anyone else they believe it would be worthwhile to talk to.

Others are expected at the hearing but at least one name has been pulled from that list. On Monday Barnes said he was working to get Moberly attorney Tom Cunningham to testify, but he now says that will not be happening. “(The Committee is) going to have a conversation about what to do about that.”

Another notable absence will be Bruce Cole, who was Mamtek’s Chairman and CEO and announced the deal at Moberly in July of 2010. Barnes says his attempts to contact Cole have been met with no response.

Testimony is expected from financial services company Standard & Poor’s, who gave Moberly’s bonds in the Mamtek deal a high quality rating. Barnes plans to ask them how they arrived at that rating and why the viability of the company did not play into it.

Also expected is Tom Smith who was a site consultant and project manager at the Moberly Mamtek site. Moberly officials testified in December that Smith e-mailed them with pictures of the alleged China plant.

A House Committee that was formed in the interim continues its work delving into the programs of the Department of Economic Development.

Chairman Jay Barnes (R-Jefferson City)‘s Interim Committee on Government Oversight and Accountability has reviewed a list of 91 projects that have received more than $1 million in state incentives over the last six years. Those projects have reported creating only about a fourth of the more than 20,000 jobs they projected. 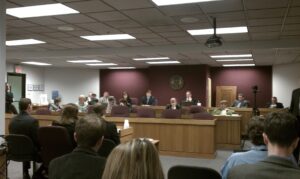 The House Interim Committee on Government Oversight and Accountability hears testimony from three representatives of the Department of Economic Development.

Barnes says this raises questions about whether the Quality Jobs Program is performing as it should. “We have results in that show that it’s not doing as well as promised. Whether that means that it’s something that we need to shelve or not is a separate question, but we do know that it is not working as advertised.”

During a Committee hearing Monday afternoon, Barnes pressed DED Business and Community Services Division Director Sallie Hemenway and Legal Counsel Chris Pieper to assess whether the Mamtek project was considered a failure under the Quality Jobs Act. Their response was that projects have different thresholds for reporting job creation, and that Mamtek has not reached the deadline to report jobs created over two years.

It was unclear whether Mamtek submitted an annual report in September. Pieper explains, “If they didn’t submit the annual report with the requisite employment, which would have been one employee by that time, then they would not receive benefits under the Missouri Quality Jobs Program.”

Still, Barnes was frustrated that the DED representatives would not offer a final pronouncement of Mamtek. Upon Pieper re-iterating that Mamtek is not going to receive Quality Jobs benefits, Barnes told him, “It’s OK to say Mamtek’s a failure.”

Pieper responded, “Mamtek did not turn out as anyone would have anticipated.”

The Committee is next scheduled to meet January 19, and Barnes says some other key figures in the Mamtek project are expected to testify. That includes: