You are here: Home / Archives for Louisiana

The National Weather Service (NWS) in St. Louis warns that major flooding is expected to continue in northeast Missouri for the next one to two weeks. 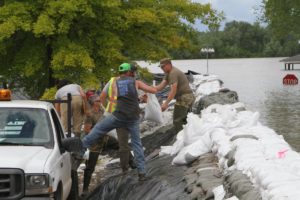 The National Guard’s 35th Brigade has been assisting along the Mississippi River in northeast Missouri’s Clarksville (May 31, 2019 photo courtesy of Missouri National Guard Twitter Page and Sgt. Christy Van Drunen)

“Another nice thing is seeing how many families are getting out there, I mean little kids, five, six, seven years old, pitching in,” Riggs says.

He says it’s “all hands on deck” in the Hannibal area and across northeast Missouri. Riggs praises the volunteers, saying they have filled hundreds of thousands of sandbags.

The NWS says the Mississippi River crested on Sunday in Hannibal, Louisiana and Clarksville. The Mississippi crested at Hannibal at about 30 feet.

“The power of the (Mississippi) River. We’ve been at flood stage in this area since March 15th,” says Riggs.

The NWS says there’s a slight risk of severe weather across northeast Missouri on Tuesday.

As he did during a Thursday interview, Riggs is asking for prayers for those impacted. He tells Missourinet “the power of prayer” is working, saying there have been miracles in the Fabius River Drainage District area.

He says Highways 61 and 24 in that area are still open.

Riggs represents Marion, Monroe and Shelby Counties in the Missouri House. All three counties are rural, with a large agricultural presence.

Closer to St. Louis, the NWS confirms there has been a breach in the Pin Oaks levee near the small town of Winfield, north of St. Charles.

Click here to listen to Brian Hauswirth’s full interview with State Rep. Louis Riggs, R-Hannibal, which was recorded on June 2, 2019:

The National Weather Service (NWS) in St. Louis says the Mississippi River at northeast Missouri’s Hannibal is cresting today at about 28.4 feet. 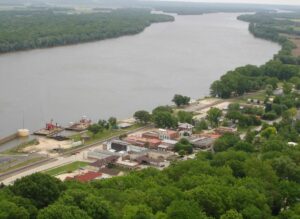 Missourinet Quincy affiliate WGEM reports about 80 volunteers are back in Hannibal today, filling sandbags for the community and for the Hannibal levee.

“So we’re just trying to fill some sand bags to help support levees. We’re probably adding one (to) about two feet to levees right now, so Hannibal, we’ve got a lot of sandbags to fill so we’re trying to get as much support as we can,” Bramblett says.

Marion County highway crews have also brought sandbags to Hannibal to assist in the effort.

Meantime, massive flooding in northeast Missouri’s Clarksville has prompted the state Department of Corrections (DOC) to send more than two dozen inmates to help sandbag in the river town.

The NWS in St. Louis says the Mississippi River at Clarksville is expected to crest at 36.2 feet on Sunday.

Clarksville is a town of about 450 residents.

The flooding is also impacting mail service across northeast Missouri.

The United States Postal Service (USPS) says post offices in La Grange and Clarksville have temporarily closed, due to flooding.

National news outlets have picked up the story of a man police used a Taser on to prevent him from trying to rescue his 3-year-old stepson from a burning home in the Mississippi River town of Louisiana. Riley Miller died in the fire on the morning of Halloween.

The father, Ryan Miller, tried to enter the home after the rest of his family had escaped the fire but officials tried to stop him, saying it was too dangerous. When he did not cooperate Louisiana police used a Taser on him three times.

The City’s administrator says he’s investigating the fire and whether police and fire departments acted appropriately.