You are here: Home / Archives for Lottery

Governor Jay Nixon (D) says he will freeze another $35.1-million in education spending due to a continuing decline in revenue from lottery and gaming. Nixon says he will restrict the spending of $10.5-million for four-year higher education institutions and $24.6-million from the K-12 education funding formula.

Lottery and gaming revenue are directed to education by Missouri law.

This latest action is in addition to $22-million he restricted in higher education and K-12 spending in April. Nixon had asked the legislature to provide $44-million in a mid-fiscal-year supplemental budget to make up for lottery and gaming revenue falling short. Legislative budget makers thought $22-million was enough and provided that amount instead. Nixon then withheld $15.6-million from K-12 schools and $3.2-million each from community colleges and four-year universities.

Nixon says he remains concerned that the legislature didn’t account for lottery and gaming revenue trending lower in its fiscal year 2015 budget, sent to the governor less than two weeks ago.

Lawmakers for several years have struggled with what has been termed a fight between children and veterans. Several education programs and veterans programs are funded by lottery proceeds, and legislators have struggled to find a balance between the two. The House has given tentative approval to a bill that, its sponsor says, achieves that balance. 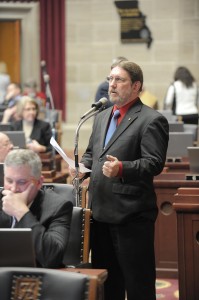 Representative David Day (R-Dixon) tells his colleagues, “The bottom line with this bill is … it will end the ongoing fight between early childhood and veterans for their funding, which both sides really, really want.”

Day’s bill dedicates casino entrance fees to veterans programs. “That, added to what they’re already receiving from that fund which is about $6.6 million, will put them at about $37 million in funding … it takes care of all their programs: the homes, the cemeteries and all of that, which is enough to do what they need to do and give them just a little bit in reserve.”

The bill will increase funding to early childhood by about $4.5 million to about $35 million based on 2011 figures. Day pays for that by pulling more money from the pool that goes to pay out lottery winnings. It will be reduced to about 59 percent, from 63. Day says voters approved a minimum of 45 percent to payouts.

The bill sets a minimum of 27 percent of lottery funds that must go to general education. It also increases funding to the National Guard Trust Fund to $5.5 million, which supports scholarships, burial duties and other work done by the Guard. Finally, the Access Missouri financial assistance program will get $5 million.

Even with the cut to the money available for payouts, Day says Missouri will still be one of the leading states in that category.

The bill has received bipartisan support. Representative Sara Lampe (D-Springfield), who has been outspoken on education issues, told Day, “I thank you for bringing this forward … and making sure that children don’t lose and veterans don’t lose.”

One more favorable vote will send the bill to the Senate.

If you bought a lottery ticket at a St. Charles QuikTrip, you could be a million dollars richer.

The Missouri Lottery reports the convenience store at 1640 South Fifth Street sold the winning ticket for the January 20 th drawing.

Four winning numbers were drawn to win 100-thousand dollars. Those tickets were purchased at a Snappy in Licking; the T Stop in Savannah; a 7-Eleven in Park Hills; and Rush Hour in Lee’s Summit.

For a complete list of the winning numbers, visit Molottery.com.

Winners have until July 19 to claim their prizes.

The deadline has come and gone – and that means a $200,000 Powerball ticket sold in Univeristy City is now a worthless piece of paper. The ticket was sold last May. The winner had six months to claim the money. The deadline was 5 p.m. Monday.

This is the third time in two years that a person who bought a $200,000 dollar winning ticket in Missouri has failed to turn it in.

So far, the 7-7-7 Pick 3 and 7-7-7-7 Pick 4 combinations have not sold out, but anyone wanting to play those numbers is urged to get a ticked as quickly as possible.

He’s 84. His wife is 79. And Jim and Shirley Wilson are now worth about a quarter-billion dollars, before taxes, if they want to be. Now they have a big choice to make. Do they want the largest Powerball jackpot in Missouri history to be paid to them in annual installments until he is 114 and she is 109, or do they want a lump-sum payout. They’ll get six million dollars a year afer taxes in 30 annual payments, or a lump sum of $86-Million after taxes right now. They’ll split the money with their two sons, arrange college educations for the grandchildren, and maybe buy a house in a warmer climate.

29 Missouri Lottery-made millionaires who have won a total of more than $431-Million travel to Jefferson City to take part in an event that sees past winners giving their time to help the needy. Michael Lang of St. Peters was part of a group of state workers in the St. Louis area whose lives changed earlier this year with the $224-Million winning ticket in the April 12th Powerball drawing. He joined 28 other millionaires at the Samaritan Center – a Jefferson City service center providing food and clothing to the needy. And, he was happy to help out. Lang says he’s happy to help those in need. This was the 20th annual Missouri Lottery Millionaires Reunion. Each year, the Missouri Lottery invites past winners to converge on a location, somewhere in the state, to contribute their time to the less fortunate. The Lottery’s Gary Gonder says that while the Reunion has been going on for twenty years, it was only in recent years that it became a philanthropic event.

The State Appeals Court in Kansas City says it’s never too late to turn in a Powerball ticket. It has ordered the State Lottery Commission to pay $100,000 to a man from Dyersburg, Tennessee, whose wife found an old Powerball ticket while cleaning out his pickup truck. Lottery guidelines require tickets to be turned in within 180 days of the drawing. But Paul Barnett’s ticket didn’t turn up until almost four months after the deadline. The Appeals Court says the Lottery Commission and the Legislature improperly established the 180 day deadline in 2002. The ruling covers only the Powerball game. The Attorney General is considering whether to appeal.

$224-Million isn’t enough for thirteen state employees in St. Louis who hit the Powerball Lottery jackpot April 12th. They say new groups are being formed – depending on who still wants to play – and employees are taking turns buying new tickets. Eleven people are taking about $8.5-Million cash. Two members of the group will get about $4.2-Million because they didn’t buy as many tickets as the others.

Not just one winner of the biggest Powerball ticket jackpot in Missouri history, but 13. Thirteen people who work at a Missouri Social Services office in Florissant have been pooling money to buy Powerball tickets for about a decade and this time their numbers matched. The group bought sixty tickets on Wednesday, hours before the drawing that showed one of them had the right numbers.