You are here: Home / Archives for Lindenwood Lions

Lindenwood and William Jewell will square off for the 2010 Men’s Basketball HAAC Tournament Championship on Monday evening at 7 p.m. in Liberty, Mo. Besides hardware being on the line, the winner will receive an automatic bid to the national tournament, while the other team will see a successful season end earlier than it hoped.

END_OF_DOCUMENT_TOKEN_TO_BE_REPLACED

One St. Louis area university athletic program could soon be making the move from the NAIA to the NCAA. On Friday, the Board of Directors of Lindenwood University in St. Charles put the wheels in motion to make the transition from the NAIA to Division II of the NCAA. END_OF_DOCUMENT_TOKEN_TO_BE_REPLACED 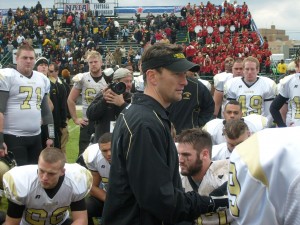 A week after the Northwest Missouri State Bearcats from Maryville captured the NCAA Division II National Football Championship in Florence, Alabama, the Lindenwood Lions from St. Charles gave it their best shot at bringing a second national title to Missouri in as many weeks, but they came up short in the NAIA title game in Rome, Georgia. The Sioux Falls Cougars from South Dakota, the top-ranked team in the NAIA, downed the third-ranked Lions 25-22 in an exciting back and forth contest played in cool temperatures and under gloomy skies. END_OF_DOCUMENT_TOKEN_TO_BE_REPLACED