You are here: Home / Archives for Les Bourgeois 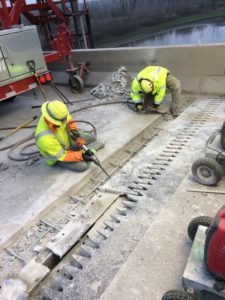 Missouri Department of Transportation (MoDOT) project manager Melissa Wilbers says three to eight-hour backups are possible, when the project starts in the spring.

“And we have actually seen those types of delays in our inspection that we had done earlier this year,” Wilbers says.

Wilbers tells Missourinet there were nine-mile backups on the bridge this summer, when MoDOT did expansion joint replacement work.

MoDOT says the 59-year-old bridge is in poor condition.

Wilbers says the current plan is to begin construction in the spring, with an expected completion date in late 2020. She says the planned $18 million rehabilitation will extend the bridge’s life for another 10 to 15 years.

MoDOT will hold today’s meeting from 4-6 at Rocheport’s Les Bourgeois. It’s an open house, which means there will not be a formal presentation.

Displays will be set up, and MoDOT representatives will be available to answer your questions.

“We applied for the federal INFRA grant in March earlier this year, and we are waiting on word from the federal government whether we are going to receive those funds or not,” Wilbers says.

INFRA stands for a federal Infrastructure for Rebuilding America grant.

If the grant goes through, Wilbers tells Missourinet MoDOT would build a new bridge instead of the rehabilitation project, which means the old bridge would be used while a new one is built.

That would prevent the massive I-70 backups.

Click here to listen to Brian Hauswirth’s full interview with MoDOT project manager Melissa Wilbers, which was recorded on July 17, 2019: