You are here: Home / Archives for Kingdom City

The National Weather Service (NWS) says most of Missouri is currently under a winter weather advisory, and will see two waves of winter weather by Thursday morning. 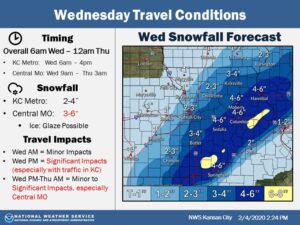 The National Weather Service in Pleasant Hill says the heaviest snowfall will be between the I-44 corridor and the Highway 36 corridor in north Missouri (February 4, 2020 map courtesy of NWS Pleasant Hill Twitter page)

NWS Kansas City meteorologist Jimmy Barham says most of the snow will be between the I-44 corridor up to the Highway 36 corridor in northern Missouri.

“The more significant snowstorm looks like it’s going to push in as we get into the morning hours tomorrow, especially down towards Springfield,” Barham says. “We’re going to see snow totals even by the afternoon up into the one to three inch range.”

The second wave will have the heaviest impact on mid-Missouri’s Columbia, Jefferson City and Lake of the Ozarks, which could receive up to six inches of snow.

“Going into the parade might not be too bad, but coming out of the parade you’re probably going to have hazardous travel conditions,” says Barham. “Especially if you’re going east past Sedalia into the Columbia towards St. Louis area.”

Wednesday morning’s parade begins at 11:30, and the victory rally is set for 1:30 p.m. at Union Station. The state Department of Transportation (MoDOT) is expecting “hundreds of thousands” of fans to attend.

Barham emphasizes that Wednesday’s second wave, which is coming from Oklahoma, will be stronger.

The latest NWS models also show a heavy band near I-70 on Wednesday, between Kingdom City and Montgomery County. That area could see up to eight inches of snow.

Far southeast Missouri is the only area that’s not expected to see snow.