You are here: Home / Archives for Kerry Cordray 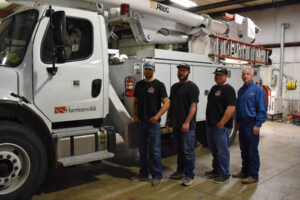 Linemen from western Missouri’s Harrisonville stop for a quick picture, before leaving for Louisiana on October 8, 2020 (photo courtesy of city of Harrisonville)

“But these guys are great at what they do, and they’re very dedicated to doing their work well, wherever they’re doing it,” Cordray says.

The MPUA crews are from four Missouri municipal utilities: Harrisonville, Nixa, Palmyra and Poplar Bluff. They’re working in Alexandria, which is northwest of New Orleans. Cordray tells Missourinet the damage in Alexandria wasn’t as big as it was for Hurricane Laura six weeks ago.

“If there are still outages in nearby public power communities when restoration at Alexandria is complete, the crews may be made available to another location before coming home,” he says.

Harrisonville is located south of Kansas City, while Nixa is south of Springfield. Palmyra is in northeast Missouri, and Poplar Bluff is in southeast Missouri. Cordray says the four towns have “public power” electric utilities and are part of MPUA.

“These public power utilities (MPUA) are as large as Springfield, Columbia, Independence, but include many smaller towns and rural communities, some with only a few hundred residents,” says Cordray.

MPUA has 79 Missouri members that provide electricity. The Missouri crews in Alexandria are equipped with four bucket trucks, another specialty truck and other linework vehicles and machines.

The town of Alexandria, Louisiana issued a call to the MPUA for mutual aid assistance, which is coordinated through MPUA’s mutual aid network. Towns that assist are reimbursed by the municipal utilities receiving assistance.