You are here: Home / Archives for Kennedy Space Center

A crew of astronauts, including southern Missouri native Mike Hopkins, is getting settled in aboard the International Space Station (ISS). They lifted off from the Kennedy Space Center on November 15 and are spending the next six months in space. 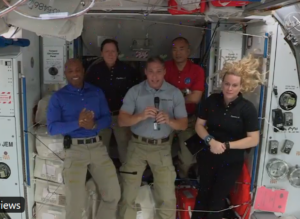 The crew is part of the first manned operational space flight of a U.S. commercial shuttle. The space mission marks the second one for Hopkins.

During an update with NASA, Hopkins, the commander, talks about the rocket’s name – “Resilience.”

“It’s been a tough year and the fact that SpaceX and NASA were able to get our spacecraft ready to go – the rocket ready to go – throughout this year, throughout the pandemic and all of that, we were inspired by everybody’s efforts to do that. So that’s why we named it Resilience and we hope that it puts a smile to peoples’ face – it brings hope to them,” says Hopkins.

He says a longstanding astronaut tradition is to take along a sidekick to space and show viewers at home. Their choice seems appropriate given their location.

“We had just started watching the (Star Wars) series and it’s hard not to like baby Yoda,” says Hopkins. “I think the ride into space was probably a little rougher than baby Yoda was used to.”

The space station spans the area of an American football field and weighs more than 861,000 lbs. The complex has more livable room than a five-bedroom home, with two bathrooms, a gym and a 360-degree bay window.

Hopkins grew up in southern Missouri’s Richland near Fort Leonard Wood. He also has family in the Lake of the Ozarks area in central Missouri.

Later this month, north St. Louis County native Bob Behnken will put on his spacesuit and command the historic SpaceX flight to the International Space Station. He will strap into his seat in the cockpit of the Dragon spacecraft and fire up the vehicle. After a countdown concludes, Behnken and another NASA astronaut will lift off from the Kennedy Space Center in Cape Canaveral, Florida.

He will be aboard the first manned U.S. spaceflight in nearly a decade. The May 27 mission is also the first attempt by a private company – SpaceX – to fly astronauts to orbit.

Behnken, a Pattonville High and Washington University graduate, grew up being inspired by NASA’s programs. That inspiration has launched him into space two other times. He has logged more than 1,000 flight hours in 25 different aircraft.

“What’s really happened is the normal quarantine that astronauts go through about two weeks prior to launch to really make sure that we don’t take anything to the International Space Station or get the crew on orbit sick or be sick when we get on orbit. We’ve had to kind of stretch out and kind of begin closer to ten weeks prior,” says Behnken, a U.S. Air Force colonel.

He says the coronavirus will change the way the public gets to share the experience with the crew. For space shuttle launches, hundreds of thousands of people usually watch the launch at the Kennedy Space Center and nearby beaches. But the coronavirus outbreak has led NASA and SpaceX leaders to encourage the public to instead watch the liftoff on TV or online.

NASA is limiting the number of guests permitted at the space center, and the Kennedy Space Center Visitor Complex is not selling tickets for public viewing on NASA property. The visitor complex closed indefinitely in mid-March.

Behnken says this mission is the first one his son will get to watch him take part in.

Behnken and his wife, K. Megan McArthur, are both astronauts.

“It’s been really interesting, I think for both my wife and I, to have gone through the process of seeing each other launch in space. That’s an aspect of our relationship I think that most couples can’t share,” he says. “Because I’ve seen her take that risk and had it be in front of her and I’ve done that to her.”

The length of the latest mission is unknown.