You are here: Home / Archives for Kawasaki

The largest employer in northwest Missouri’s Nodaway County is creating 110 new jobs. Kawasaki in Maryville is adding an assembly line and a second shift. 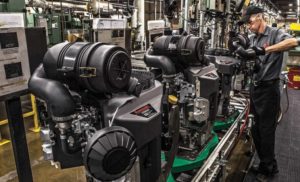 The plant, which has about 1,100 workers, manufactures small industrial gasoline engines for lawn, garden and turf products.

“The first line on our second shift – we are tentatively ready to begin on October 19. And then our plans are to have a second line begin operations basically mid to late November,” says Melvin.

“Our primary objective would be full-time permanent,” says Melvin. “That’s what we like to have. Those individuals would be able to get the full results from our benefits package.”

Melvin says the second shift could be helpful to parents raising kids who are learning online during the COVID-19 crisis.

The company has taken a variety of steps since the onset of the pandemic to help protect its workers. It closed for more than three weeks in April.

“Our thought process was we weren’t ready for this and ready to protect our employees the way that they should be,” he says.

During the shutdown, workers came up with health measures, including plastic barriers, increased cleaning protocol, proper spacing methods, and individually-wrapped food items in the cafeteria. Melvin says the company also gave a portion of worker paychecks back to them while the plant was closed during that time. It also suspended payments into some benefits programs.

Although Kawasaki workers have not been immune to the virus, Melvin says the company has gone to great lengths to keep COVID-19 out of its building.

Kawasaki opened in Maryville in 1989. The factory has workers from around northwest Missouri, and a few from southwest Iowa, Kansas and even Nebraska.