You are here: Home / Archives for Kawasaki in Maryville 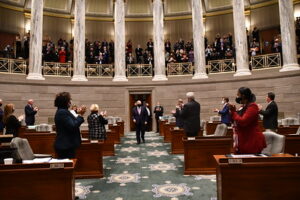 Governor Parson is also highlighting the expansions at Boeing in St. Charles and Ford Motor Company in Claycomo.

One of the biggest projects is in southwest Missouri’s Republic, where Amazon will open its first fulfillment center this year. The facility will create more than 500 new full-time jobs, in the fast-growing community. Starting pay for fulfillment center workers will be $15 an hour.

Kawasaki, which is the largest employer in northwest Missouri’s Nodaway County, is creating 110 new jobs by adding an assembly line and a second shift.

The plant already has about 1,100 workers. It manufactures small industrial gasoline engines for lawn, garden and turf products.

During Wednesday’s State of the State, Governor Parson noted that Missouri has jumped from 21st to 11th in the nation among site selectors. He says that’s primarily due to the success of workforce development programs.

“Through Missouri One Start for example, nearly 100,000 Missourians have received training through partnerships with over 400 companies,” says Parson.

The governor says since the newly revamped program was launched, businesses have invested $2.5 billion in Missouri.

Parson is also praising Ranken Technical College’s announcement of a new $7.5 million advanced manufacturing training facility in eastern Missouri’s Troy. He says it’s a “great example of what we can accomplish when education, government and the private sector work together.”

The governor also emphasized the importance of infrastructure, during the address. He specifically focused on levee projects and major bridge projects, including the Buck O’Neil bridge in Kansas City and the I-70 Rocheport bridge.