You are here: Home / Archives for Kansas City Royals

(Detroit, MI) — Jordy Mercer blasted a two-run homer with one out in the ninth as the Tigers walked off the Royals 10-8 in Detroit. Harold Castro hit a three-run homer in Detroit’s five-run second. Travis Demeritte also homered for the Tigers, who have won two-of-three. Hunter Dozier belted two homers in defeat. Alex Gordon added a three-run shot for KC and Cheslor Cuthert hit a two-run blast. Starter Jorge Lopez failed to make it through two innings, giving up five runs. Richard Lovelady took the loss. The Royals are 1-and-8 in their nine.

(Cincinnati, OH) — Nicholas Castellanos homered twice as the Cubs pounded the Reds 12-5 in Cincinnati. Ian Happ also went yard for Chicago. Jonathan Lucroy drove in a pair of runs and Tyler Chatwood picked up the win. The Cubs have won six of their last seven and lead Milwaukee by three-and-a-half games in the NL Central. Aristides Aquino homered for Cincinnati. Kevin Gausman took the loss after giving up two runs in two innings of relief. The Reds had their three-game winning streak snapped.

(San Francisco, CA) — Madison Bumgarner and two relievers combined on a one-hitter as the Giants shut out the Phillies 1-0 in San Francisco. “MadBum” went seven innings to even his record at 7-and-7. Mike Yastrzemski homered and drove in three runs as the Giants snapped a four-game skid. Aaron Nola allowed three runs in five innings to fall to 10-and-3 for Philadelphia. Cesar Hernandez had the lone hit with a pinch-hit single in the sixth. The Phils have lost three in-a-row to fall a half-game behind Milwaukee for the second NL wild card. The Giants are three games behind the Brewers. 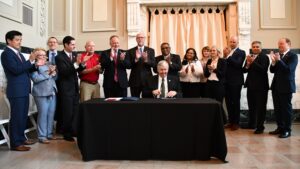 Joe Reardon hopes it will lead to additional regional cooperation.

“And an end to the destructive back and forth of luring of companies from one side of the state line to the other, with no creation of net new jobs,” Reardon says.

The bill impacts companies moving between three Kansas counties and Missouri’s Cass, Clay, Jackson and Platte counties. The Missouri law will only take effect if the Sunflower State passes a reciprocal agreement.

Reardon, who spoke at Governor Parson’s bill-signing ceremony at Union Station this month, says resolving the border war has been a top priority for the Chamber and for business leaders in the region.

“We believe our true competition is not between us or across the line that’s not far from outside this door (Union Station), but it’s with other regions like Dallas, Denver, Nashville,” says Reardon.

The Hall Family Foundation says more than 10,000 jobs moved between Missouri and Kansas during the past decade, with an incentive cost of $330 million.

The jobs all moved in the Kansas City region.

Mr. Reardon notes cooperation has happened before, noting that voters on both sides of the state line backed a 1996 tax increase to restore Union Station, which was crumbling at the time. Reardon says fast forward to 2015 at Union Station, after the Kansas City Royals won the World Series.

“This became the gathering spot for almost 800,000 Kansas Citians from all over, both sides of the state line,” Reardon says.

The renovated Union Station includes an Amtrak depot, a permanent rail exhibit known as the KC Rail Experience, a planetarium and a science city.

Governor Parson says Missouri and Kansas have both spent “well over $100 million” in the border war, telling reporters after the bill-signing that “there’s no reason we can’t be using that money for a lot better purposes than just jumping from one side of the state (line) to the other.”

Kansas Governor Laura Kelly (D) has issued a statement echoing Governor Parson’s comments about the irresponsible spending by both states, “with little actual job growth for either state.”

Kelvin Herrera gave up an RBI single to Joey Wendle in the top of the ninth as the Royals lost 6-5 to the Rays at Kauffman Stadium.  Whit Merrifield’s two-run single in the seventh tied the game at five for KC, which trailed 4-1 early.  Starter Ian Kennedy allowed five runs in six innings.   Herrera has been near perfect having just allowed one run in 16 appearances with an 0.61 ERA entering Tuesday’s ninth inning.  Tampa Bay got to Herrera with three singles in the ninth.

The Royals and Rays finish their three-game series this afternoon at “The K.”  Jason Hammel starts for KC still looking for his first win of the season at 0-and-4.  Jacob Faria starts for Tampa Bay.  The Royals are 13-and-29, seven-and-a-half games back in the AL Central.

Eric Skoglund gave up RBI singles to Matt Duffy in the first and sixth innings as the Royals lost 2-1 to the Rays at Kaufmann Stadium.  Skoglund went seven-and-two-thirds, but fell to 1-and-3 with the tough-luck loss.  Whit Merrifield’s hit a solo homer for the Royals’ lone run.

All Skoglund came away with was an outing to rest the bullpen:

Duffy went 3-for-4 with the pair of RBI-singles as Ryan Yarbrough tossed five innings of one-run ball to up his record to 3-and-2.  Alex Colome pitched a scoreless ninth for his seventh save.  Merrifield finished 3-for-4 with a solo homer in the third inning for KC’s only run.

The Royals and Rays play the second of their three-game series tonight at “The K.”  Ian Kennedy will start for KC.  He’s 1-and-4 with a 4.61 ERA.  Anthony Banda makes his Tampa Bay debut.  The Royals are 13-and-28, seven-and-a-half games out of first in the AL Central.

Yan Gomes had four hits, including a three-run shot, and Jose Ramirez added a three-run homer as the Indians routed the Royals 11-2 in Cleveland.  Michael Brantley contributed a two-run blast and three RBIs, while  Francisco Lindor had three hits to hike his hitting streak to a career-best 14 games.  Corey Kluber  worked six innings for his American League-leading sixth victory.

Kansas City starter Danny Duffy was torched for nine runs on eight hits, two of them home runs, to fall to 1-and-5.  The Royals went 2-and-4 on their two-city trip.

The Royals tied a franchise record with 4 HRs — 3 in a row — in a huge 1st inning as they scored ten runs on their way to a 15-7 victory over the Baltimore Orioles.  Jorge Soler, Mike Moustakas, Salvador Perez and Alex Gordon homered in the first.  “Moose” homered twice and drove in five runs, and Alex Gordon had four hits and three RBI.

Danny Duffy got his first win of the season for KC, which has won seven-of-10.  The Royals had lost seven in a row at Camden Yards.

Dylan Bundy failed to retire any of the seven batters he faced and took the loss.  He’s the first pitcher since 1900 to surrender four home runs without registering an out.  Chris Davis, Danny Valencia and Caleb Joseph homered for Baltimore, which has lost seven straight.

Mookie Betts belted three solo homers and J.D. Martinez also went deep, leading the Boston Red Sox to a 5-4 victory over Danny Duffy and the Kansas City Royals on Wednesday. Cheslor Cuthbert homered for Kansas City, and Drew Butera had a two-run double. The Royals were trying for consecutive wins for just the second time this season.

Kansas City closed to 5-4 on Cuthbert’s homer in the eighth.

Xander Bogaerts belted a go-ahead grand slam in a five-run third inning and the Red Sox went on to beat the Royals 10-6 at Fenway Park.  Mitch Moreland also homered for Boston, which spotted KC a 3-0 lead in the first.  Hector Velazquez struck out three over two innings of one-hit relief to get the win.  Boston’s 19 wins in April are a franchise record.

Jason Hammel struggled giving up eight hits and eight runs in four-and-two-thirds frames to fall to 0-and-3.  Whit Merrifield went 3-for-5 with two RBI and Alcides Escobar had three hits and drove in a run for the Royals.  Third baseman Mike Moustakas left Monday’s game with a right forearm bruise after being hit by a pitch from Rodriguez in the first inning. X-rays taken at Fenway Park were negative. Moustakas said after the game that the injury was not serious.

Royals right-hander Scott Barlow made his Major League debut. Barlow struck out the first man he faced, Christian Vazquez, and pitched a scoreless inning. Barlow allowed a run in his second inning of work, and then another scoreless frame.  “I got to warm up in Kansas City and my heart was pounding then,” Barlow said. “But being at Boston and at Fenway, your heart is coming out of your chest.”

Cheslor Cuthbert homered twice and drove in four runs as the Royals clipped the White Sox 5-4 in Kansas City.  Cuthbert hit a solo-shot in the fourth inning and added a three-run bomb in the fifth as the Royals stormed ahead.

Whit Merrifield put K.C. up for good with an RBI single in the eighth.  Merrifield says his hit will hopefully jump start the team.

The four RBIs tied a career high for Cuthbert, having done it previously on June 11, 2016, also against the White Sox. Merrifield says they expect more big days from Cheslor Cuthbert who hasn’t driven in a run since March 30 and hadn’t homered since last Aug. 20.

Kevin McCarthy got credit for the win and Blaine Boyer locked down the save.  The Royals improved to 7-and-20.  Daniel Palka, Nicky Delmonico and Leury Garcia each had run scoring extra-base hits for Chicago as it fell to 8-and-18.  Bruce Rondon was tagged with the loss out of the pen.

The Royals head to Boston for a Monday night game at 6:10 CT.

Teoscar Hernandez went 4-for-6 with a home run and four RBI and Curtis Granderson added a grand slam as the Blue Jays routed the Royals 15-5 at Rogers Centre.  Yangervis Solarte also went deep as Toronto completed a three-game sweep.  Ian Kennedy fell to 1-and-2 for KC, which has lost eight straight.  Whit Merrifield and Jorge Soler homered in the loss.

Relief pitcher Justin Grimm got hammered for the fourth straight appearance.  Grimm recorded just one out, a strikeout of former Cardinal Randal Grichuk and gave up the grand slam to Granderson.  Grimm has allowed 13 earned runs over his last 2 1/3 innings and has allowed at least a run in five of his nine appearances.

Grimm was waived by the Chicago Cubs on March 15 and signed by Kansas City on March 18.

Ned Yost says he’s not ready to hit the panic button as his team dropped to 3-13.

The Royals are off today before opening a four-game series tomorrow with a doubleheader in Detroit.  Right-handers Jason Hammel and Jakob Junis are the Kansas City starters.  The Tigers will counter with Michael Fulmer and Daniel Norris.  It will be the Royals’ second doubleheader in four days as they attempt to end an eight-game losing streak.