You are here: Home / Archives for Kansas City International Airport 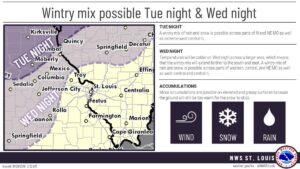 “The best chances for any kind of accumulating snow and any kind of light glaze from freezing drizzle is going to be north of the (Missouri) river, into that Maryville, Chillicothe, Kirksville area,” Bowman says.

He says the heaviest snowfall will be north of the Highway 36 corridor.

“Areas from Moberly to (northwest Missouri’s) Chillicothe could see about one to two inches,” says Bowman. “Kirksville, maybe upwards of four inches.”

The winter weather advisory issued by the NWS in Pleasant Hill does not include mid-Missouri, at this time. Mr. Bowman tells Missourinet that Jefferson City, Columbia, Mexico and Sedalia could see a glaze of ice, primarily on elevated surfaces, along with light snow.

“Looking at maybe a trace to an inch of snowfall, so you know, a dusting to maybe an inch,” Bowman says.

The NWS also says three-tenths of an inch of snow fell Monday night at Kansas City International Airport, making it only the 14th measurable October snowfall in 132 years of record-keeping. It’s also only the third time it’s happened in back-to-back years.

Click here to listen to the full interview between Missourinet’s Brian Hauswirth and National Weather Service (NWS) meteorologist Chris Bowman, which was recorded on October 29, 2019: