You are here: Home / Archives for Kansas City Chamber of Commerce

The governors of Missouri and Kansas have signed a historic agreement that officially ends the economic “border war” between the two states. Missouri Governor Mike Parson (R) says incentivizing companies to move a few miles does not result in new jobs. 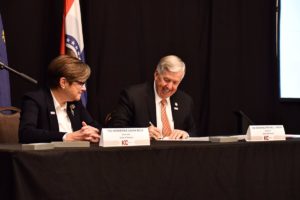 “I think there’s a much better use for taxpayer money that we can be utilizing,” Parson says. “And the incentives that we were doing before it seemed to me to be a waste.”

Parson says both states have spent “well over $100 million” on the border war. The two governors signed a joint commitment, during a Tuesday summit at Memorial Hall in Kansas City, Kansas.

Kansas Governor Laura Kelly (D) says the border war was a mistake. Without naming him, she says former Kansas Governor Sam Brownback (R) passed up an opportunity to end this a few years ago.

“We (Kansas) have really been through a world of hurt in the past eight years and we’ve got an economy to grow, jobs to grow, population to grow,” Kelly tells reporters.

The Kansas City-based Hall Family Foundation says more than 10,000 jobs moved between Missouri and Kansas in the past decade, with an incentive cost of $330 million.

The Kansas City Chamber of Commerce describes the agreement as a “historic day.”

Governors Parson and Kelly say they’re also working together, with the United States Department of Agriculture’s (USDA) announcement that they’ve selected the greater Kansas City area for the relocation of two major facilities.