You are here: Home / Archives for juvenile certification

Missouri’s governor will travel to Kansas City and to Springfield on Monday afternoon, to discuss the upcoming special session on violent crime. 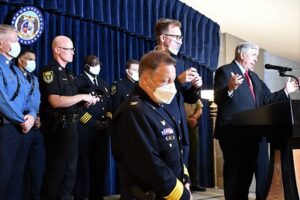 Law enforcement officers from across Missouri joined Governor Mike Parson for his special session call about violent crime on July 15, 2020 in Jefferson City (photo courtesy of the governor’s Flickr page)

Governor Mike Parson (R) will be joined at both visits by state Department of Public Safety (DPS) Director Sandy Karsten.

During Thursday’s Capitol media briefing in Jefferson City, Governor Parson said that he wants the upcoming special session to narrowly focus on violent crime, and wants it to be completed as quickly as possible.

The special session begins next Monday, July 27. The governor notes not every lawmaker will need to be in the Capitol each day. The bills will be heard in committee, before they head to the floors of the Missouri House and Senate.

Governor Parson tells Missourinet that the only reason he’s calling a special session is for violent crime and the homicide rates in the state.

There have been 133 homicides in St. Louis this year, while Kansas City has had 102, a 35 percent increase from last year. Springfield has had 15 homicides this year, and the “News-Leader” reports the city is on pace to break its previous yearly record of 16.

While Parson says police reform is an issue that needs to be discussed “at some point,” he says the best place to do that is during a regular legislative session, which gives more time for lengthy committee hearings.

While witness protection will be a key part of the special session call, so will eliminating the residency requirement for St. Louis police officers. Another key provision includes juvenile certification.