You are here: Home / Archives for John McCaherty

Missourians who suffer from treatment resistant epilepsy could be allowed to take an extract from cannabis under a law the House passed Thursday. 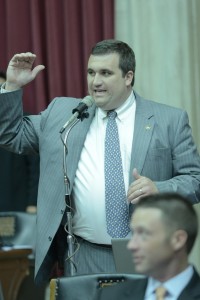 The bill would allow use of a hemp extract for treatment of epilepsy that a neurologist has determined is “intractable,” meaning it has resisted treatment by at least three known seizure inhibiting medications. Such extracts are low in THC, the chemical that makes marijuana users high, and larger amounts of cannabidiol, or CBD, that is said to be effective in preventing seizures.

The bill would allow growers who are not-for-profit and would be licensed by the Missouri Department of Agriculture. The state could also certify universities to grow cannabis for the extract and for research on industrial hemp.

Representative John McCaherty (R-High Ridge) said the legislation represents something Missouri can do that would truly help people.

“During one of our committee meetings we had a family there and they had a little child that was in an infant seat and within just the matter of the 20, 30, 40 minutes that it took for us to have that committee meeting that child never stopped having a seizure,” said McCaherty. “This was the one thing that they were asking.”

Representative Glen Kolkmeyer (R-Odessa) says he’s been convinced since the bill received initial passage that the proposal is a good idea.

“I’ve received two e-mails from constituents whose children have had epilepsy and they basically say, ‘Just help us,'” says Kolkmeyer. “I wasn’t sure where I was going to vote on this the other day, but today I will support it.”

The bill would allow the use of hemp extract oil with no more than 0.3 percent THC and a minimum of 5 percent CBD. Users or their parents would have to have a state-issued registration card.

The proposal was sent to the Senate 139-13 with a clause that would make it effective immediately upon being signed by the Governor.

A bill that would require parental consent for the use of a tanning bed by anyone under 17 has caused House Republicans’ tempers to flare at one another.

The legislation, HB 1411, would require a parent to annually give consent for a child under 17 to use tanning beds. Supporters say the bill would ensure that parents consider the risks of skin cancer children could be exposed to by tanning.

Some Republicans say the bill grows government and interferes needlessly with small businesses who have tanning beds.

Representative Denny Hoskins (R-Warrensburg) says tanning facilities don’t need to be regulated like those that offer ear piercings or tattoos.

“A piercing and a tattoo are permanent,” says Hoskins.  “It will be on your body forever. I find it hard to argue that going to a tanning solon once would be that.”

Hoskins introduced an amendment that would have nullified the legislation.

The comments and his amendment angered fellow Republican, John McCaherty (High Ridge).  “Get your science straight,” he told Hoskins. “Piercings are not permanent. You can get your ears pierced, the will grow back. Death … death is permanent. Cancer can be permanent.”

Hoskins’ amendment was defeated and the bill was given initial approval. It needs another favorable vote to go to the Senate.

The state House has given initial approval to a bill that would cap the amount that could be awarded to plaintiffs for non-economic damages in medical malpractice lawsuits.

The bill sponsored by Representative Eric Burlison (R-Springfield) would limit such damages to $350,000 but would not apply to damages such as lost wages or hospital bills.

Supporters say the bill is needed to keep medical malpractice insurance premiums paid by doctors low, thereby making it easier for doctors to stay in business in Missouri and keeping the cost of health care down. Opponents say the bill infringes on the rights of Missourians to have a jury decide what appropriate damages would be.

The proposal is a priority of House Speaker Tim Jones (R-Eureka), who says since the state Supreme Court threw out such caps in 2012 Missouri is at risk for rising health care costs, lesser quality of care and a struggle to get health care professionals to come to or stay in the state.

“Understand that whatever number you set,” he says of the $350,000 cap, “that’s a real person. If it’s my wife or it’s my kid, I want them to have their day in court. I want my day in court. That’s what our Constitution guarantees us.”

“There are egregious examples that I think any one of us individually looking at would say, ‘$350,000 is not enough,'” Webber says. “But today we’re going to paint with a broad brush all those cases and remove that ability of folks to make that decision.”

Burlison says doctors have asked him to continue to support the issue.

“I had an OB-GYN say, ‘These caps are gone. All of what I would take home is going to pay for premiums. I’m closing shop. There’s no reason to keep the lights on anymore,’ and I don’t blame them.”

Another favorable vote would send the legislation to the Senate.

A proposal that would make it a crime to cause a school to go on lockdown stems from an incident January 16, when a reporter for St. Louis TV Station KSDK triggered a lockdown at Kirkwood High School. 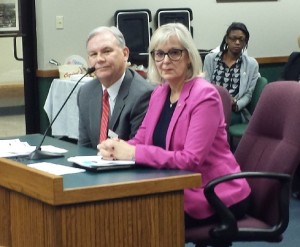 Kirkwood School District and City officials have testified in favor of that bill at a House Committee hearing.

The lockdown happened when a KSDK reporter doing a story on school security entered the High School, signed in, asked to use the bathroom but then went a different direction in the hallway.

Kirkwood Superintendent Tom Williams says the man never identified himself as a reporter and only signed in with a name and phone number, as is the school’s normal procedure. When staff thought the man acted suspiciously they called the number he left. The man said he was a reporter, but the station wouldn’t confirm his story. Williams says that is when the school went on lockdown.

“After two hours … the news station finally called to verify that the individual was actually working on an assignment for KSDK.”

The station that night ran a story about breaches in the school’s security.

“A gentleman walked into a building, walked around the building and left the building and the school had no procedures in place to stop that individual from coming into the school,” says Ellington. “It seems like we want to pass a bill to stop people from exposing holes in a system when there shouldn’t be holes in that system.”

Representative John McCaherty (R-High Ridge) says whether the reporter was right or wrong and whether the school has “holes” in its security are not the issues.

“The reality of it is,” says McCaherty, “that [the reporter] put children, teachers, himself and possibly police officers in danger by what he did.”

“Quite frankly if we’d have confronted [the reporter] on the campus and he’d have made any kind of movements that my people would have determined to be threatening, we’d have killed him.”

A parent of a Kirkwood High School junior, Jennifer Wilton, told lawmakers the incident was “terrifying” for her and other parents.

“It’s not the job of the news media to test security systems,” says Wilton. “I also don’t think it’s their place to manufacture the news.”

The American Civil Liberties Union of Missouri testified against the bill and cited concerns that its language could restrict an individual’s freedom of speech based on the actions of another entity. ACLU lobbyist Jay Hardenbrook said his organization would work with the sponsor to change that wording.

A House Committee has heard arguments for and against a bill that would make it a crime to perform an abortion for a woman who wants it because of her unborn child’s sex or a genetic abnormality.

The legislation is sponsored by Representative John McCaherty (R-High Ridge).

McCaherty says his proposal would give a woman legal grounds if after having an abortion she decided she was persuaded into having it by a doctor.

“Right now a lady has no recourse if she is coerced or if she is pressured into having an abortion by a physician or somebody like that … so if she can prove that in court she would have some recourse.”

McCaherty says cases of such persuasion have happened in the State of New York.

Missouri Planned Parenthood lobbyist Michelle Trupiano says the legislation will infringe on the rights of women faced with difficult decisions. She shared the story of a woman in Columbia who had a wanted pregnancy and learned the child had severe complications.

“We see this throughout Missouri and throughout the country … these much wanted, much loved pregnancies that up until that time the families are overjoyed, and they’re not making these decisions lightly, that these are heartbreaking, heartbreaking decisions that they’re having to make … and for a legislature to sit up here and say, ‘We know what’s right for them,” that’s talking about government intrusion in the worst.”

The committee has not voted on the proposal. 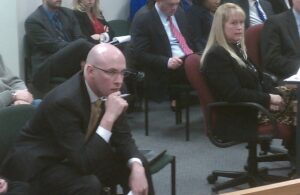 The House Committee on General Laws has held hearings on two bills whose sponsors say they are needed to protect the gun rights of Missourians.

Representative Casey Guernsey (R-Bethany) has offered HB 170 that would make it a class “D” felony to enforce or try to enforce any gun laws in connection to a gun, gun accessory or ammunition owned or made in Missouri. It would also allow a Missourian accused of violating federal law related to those items to ask for the defense of the Attorney General in court.

It also would make unenforceable in Missouri any federal laws or regulations passed after January 1, 2013 that ban or restrict ownership of semi-automatic guns or their magazines, or requires guns or accessories to be registered.

Guernsey tells the Committee the rights of Missourians to keep and bear arms must be defended.

“I think it’s incumbent upon us as legislators … the Constitution guarantees us, as legislators, the ability to protect Missouri citizens when the federal government overreaches its bounds … its delegated authority that it’s given, and I think that’s exactly what this bill does.”

Democrats on the committee raised questions about whether Missouri law enforcement officers would have to arrest federal agents enforcing federal gun laws, under Guernsey’s proposal.  They say the legislation will likely end up in the courts if it is passed.

Representative Chrissy Sommer’s (R-St. Charles) bill, HB 162, would create what she calls the “Missouri Firearms Freedom Act.” It would make guns, ammunition and gun accessories made in Missouri exempt from federal laws and regulations, including registration, under Congress’ authority to regulate interstate commerce.

Sommer says similar legislation has been filed in several other states and is the subject of a lawsuit in Montana that has been stalled for more than a year.

“Attorney Generals in Montana, Utah, Alabama, Idaho, South Carolina, South Dakota, Wyoming and West Virginia have also filed briefs in support of this lawsuit which was started by gun advocates.”

Ron Calzone, one of the directors of state sovereignty organization Missouri First, testified in favor of Sommer’s bill. He told lawmakers it could protect products made by at least one company in Missouri, CMMG in Fayette, a manufacturer that specializes in AR-15s.

“It’s what some people are calling ‘assault rifles.’ I asked the owner of that company … can you build your AR-15s with just Missouri components, and he said, ‘Yes.'” 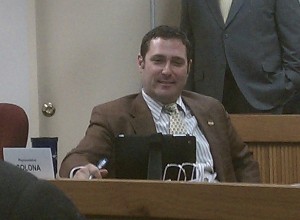 “My question is, if we draw the line in the sand … if that also comes with withholding federal funds that do things like keep guns off the streets, is it worth it?”

No one testified in opposition to either proposal, and neither was voted on.