You are here: Home / Archives for Jesus

After a heated floor debate that included numerous biblical references, the Missouri House voted Thursday afternoon to give final approval to a $34.1 billion state operating budget. The House budget does not contain funding for Medicaid expansion. 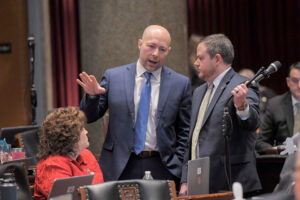 The operating budget now heads to the Missouri Senate, and Medicaid expansion supporters hope senators will include the funding. The state Constitution requires Missouri lawmakers to approve a balanced budget, by early May.

Medicaid is formally known as MO HealthNet, and it’s a federal and state program that assists with medical costs for residents with limited incomes. In August, 53 percent of Missouri voters approved Medicaid expansion, although it failed in 105 of the state’s 114 counties. Rural House members from those districts led the opposition to Medicaid expansion this week.

Amendment Two supporters say the measure expands Medicaid for residents between the ages of 19 and 64 with an income level at or below 133 percent of the federal poverty level.

House Republicans, led by House Budget Committee Chairman Cody Smith (R-Carthage) say Medicaid expansion would help able bodied adults, many who choose not to work. Smith has filed a bill to use the $1.9 billion to instead support seniors in nursing homes, to provide care for the developmentally disabled and to expand mental health programs.

“What we are doing in this is we are prioritizing the most vulnerable among us,” Richey tells House colleagues. 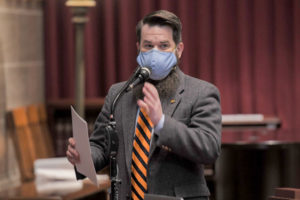 The Missouri House Health and Mental Health Policy Committee’s top Democrat is criticizing House Republicans for approving a budget that doesn’t include Medicaid expansion. She voted against the budget bill.

“In 2010 I became an activist and supported President (Barack) Obama’s Affordable Care Act, because it was the right thing to do and thank God that I did. Because it saved my life,” State Rep. LaDonna Appelbaum (D-St. Louis County) tells colleagues.

Appelbaum also talked about her experience with chemotherapy.

But State Rep. Ben Baker (R-Neosho), a minister and former dean of students at Neosho’s Ozark Bible Institute, quoted the Apostle Paul to the Thessalonians on the floor.

“If you don’t work, you don’t eat,” Baker tells the House. He accuses House Democrats of hypocrisy, and State Rep. Nick Schroer (R-O’Fallon) agreed. Schroer says Democrats quote the Roman Catholic Church and other religions, when it’s something they agree with.

“Then the king will say to those at his right hand, ‘Come, you that are blessed by my Father, inherit the kingdom prepared for you from the foundation of the world; for I was hungry and you gave me food, I was thirsty and you gave me something to drink.”

Governor Parson was asked about the House’s effort on Wednesday, during a live interview on Missourinet Sedalia affiliate KDRO (AM 1490).

“We’ll have to see how that goes in the Senate there. We did put the money in the budget for that,” Parson tells KDRO. “People did vote for it. Although I didn’t support it (Medicaid expansion) at the time but the reality of it is, the people of the state voted for it. I thought it was my obligation as governor to make sure we try to get it implemented. We’ll see though. The House voted against that … a little different maneuver I want to say, I guess. We’ll see what the Senate does and we’ll see how it comes out at the end of the day.”

Missouri lawmakers have left Jefferson City for their Easter break. They’ll return to the Capitol on Tuesday.