You are here: Home / Archives for Jeremy LaFaver 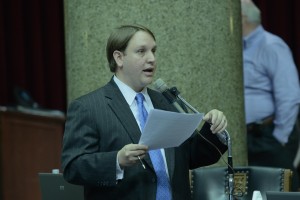 The House Budget Committee has twice voted down expansion of Medicaid.

The Committee voted to send to the full House its proposal for the budget for the fiscal year that begins July 1. Representative Jill Schupp (D-Creve Coeur) offered a set of amendments to accept federal money to expand Medicaid eligibility to about 300,000 lower-income Missourians.

With the vote to reject the first amendment effectively having made the offer of the second amendment moot, Schupp explained why she offered it anyway.

“I take advantage of every opportunity I have to talk about the importance of the expansion of Medicaid in the state of Missouri. Our hospitals – particularly our rural hospitals – our social workers, our Missouri Chamber, our doctors, our do-gooders and most importantly the people of Missouri have said, ‘Do this. Take care of the people in need. Do it now because time is wasting.'”

Representative Jeremy LaFaver (D-Kansas City), who has all session long posted outside his Capitol office door a running total of how much federal money the state could have received if it had accepted Medicaid expansion, offered the Committee an update.

The amendments were rejected on voice votes by the Republicans on the committee. Missouri Legislative Republicans have maintained that accepting Medicaid expansion would mean continuing to invest state tax dollars into what they consider a broken system. No Republicans commented on the issue in the hearing.

Republican legislation that proposes reforms and some expansion of Medicaid was heard last week in a House Committee.

The House Committee on General Laws has given its approval to a proposed change to Missouri’s Constitution regarding the power of a governor to restrict money in the state budget. 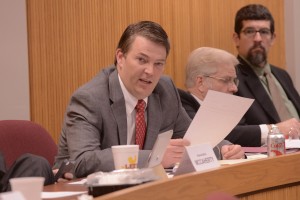 The committee passed the proposal that would ask voters to give the legislature the power to review the withholding of money in the budget by a governor. It is offered by Representative Todd Richardson (R-Poplar Bluff), who told colleagues it was inspired by budget scenarios like what he says is happening now.

“The governor is still withholding $147-million dollars that we as a legislature appropriated,” says Richardson. “There’s no financial justification for that and the legislature ought to have some say in whether the governor can continue to withhold that money.”

The resolution would have a governor issue a proclamation when he or she restricts expenditure of or reduces the amount of money appropriated in the budget because actual revenues are less than the revenue estimate an appropriation was based on. The legislature could then reconsider that appropriation.

“This is a power that I expect would be rarely used,” Richardson tells the committee. “It’s no different than the power that we have over the governor making a line-item veto in the budget.” 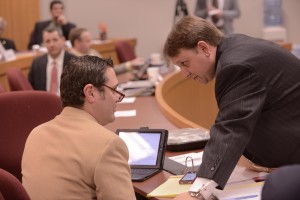 Representative Mike Colona (D-St. Louis City) told Richardson he was concerned the proposal would have unintended consequences. He asked Richardson what would happen if a legislature appropriates money based on projections that turn out to be too high.

“How does this address that,” Colona asks, “Because what I envision is … I gotta call a special session of the legislature to come in and in essence to a supplemental budget to fix it.”

Richardson told Colona the proposal would not take away any of a governor’s authority to withhold money in a budget.

“In the situation that you describe,” he tells Colona, “I would trust that there would not be a two-thirds majority of the general assembly that would override the governor’s decision in that case.”

Colona remains unconvinced. He tells Missourinet, “We’ve had a budgetary process that has worked for decades. If we throw a monkey wrench in there, who knows about the unintended consequences? I’m not about to take that risk.”

The resolution did get one “yes” vote from a Democrat. Representative Jeremy LaFaver (D-Kansas City) told the committee he liked the idea.

“The legislative branch is where I think the power should be,” he told Richardson.

The proposal would also stipulate that the governor could not reduce appropriations for the payment of public debt.

If approved by the legislature it would go on the November ballot.

The state House has approved a bill to let state employees keep guns concealed and locked in their vehicles while parked on state property. 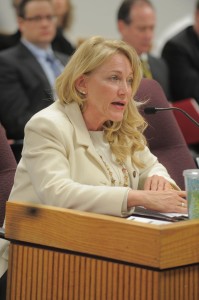 The bill was opposed on the floor by Representative Jeremy LaFaver (D-Kansas City), who expressed concern about state employees at colleges and universities having guns in their vehicles.

The bill is sponsored by Representative Jeanie Riddle (R-Mokane), who says it’s about those state employees defending themselves going to and from work.

“There are [state employees] who work here in Jefferson City or elsewhere in the state that drive long distances home or to and from work, either way, and they have no way to defend themselves, and that’s what this bill is about. Giving them the same rights that other Missouri citizens have.”

The bill passed out of the House on a bipartisan 126-25 vote.