You are here: Home / Archives for January 12 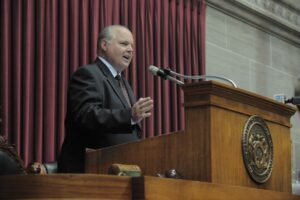 Talk show host Rush Limbaugh was inducted into the Hall of Famous Missourians on May 14, 2012 in Jefferson City. He spoke in the Missouri House chamber that day (file photo courtesy of Tim Bommel at House Communications)

The 70-year-old Limbaugh, who grew up in southeast Missouri’s Cape Girardeau, died this week at the age of 70, after battling lung cancer. January 12 was his birthday.

Limbaugh was inducted into the Hall of Famous Missourians in 2012 in Jefferson City.

“Rush Limbaugh’s contributions to broadcasting and the conservative movement cannot be overstated. He was, simply put, a legend who cannot be replaced. This is one way we can recognize the outstanding impact Rush Limbaugh has had on our state and country,” Billington says, in a statement.

Billington says Limbaugh also raised $1.7 million for the Leukemia and Lymphoma Society of America, in his annual Cure-a-Thon radio program.

Former President Donald Trump awarded the Presidential Medal of Freedom last year to Limbaugh, in Washington. That’s the highest honor a citizen can receive from the president.

Former House Speaker Steven Tilley, R-Perryville, inducted Limbaugh into the Hall of Famous Missourians in May 2012. At the time, some Missouri House Democrats criticized Tilley’s decision, because Limbaugh had described a Georgetown law student as a “prostitute”, after she testified before Congress regarding contraceptives.

Former Speaker Tilley told Missourinet this week that he and his caucus stood firm, and were honored to induct Limbaugh into the Hall of Famous Missourians.