You are here: Home / Archives for Jamie McMurray 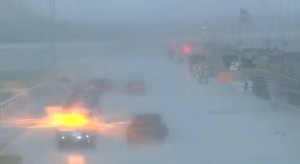 The view down pit road as rain washes out the Quicken Loans 400 at Michigan International Speedway.

(NASCAR)—Mother Nature won at Michigan but Kurt Busch finished in first place.  Rain stopped the 400-mile Cup race at Brooklyn, Michigan before Columbia driver Carl Edwards couldn’t recover from a bad pit stop to climb higher among finishers.  NASCAR declared the race official after 138 of the scheduled 200 laps when a torrential downpour brought out the red flag for the fourth time.

Edwards led 42 laps and tried to stretch his fuel until the last storm hit the speedway but had to pit shortly before the deluge began.  He had consistently been in the top throughout the race.

Joplin’s Jamie McMurray put together another solid run, finishing 7th and strengthening his position in the points as the top-ranking driver without a victory this year.   Ten drivers, including Edwards, have at least one win this year.  The top sixteen drivers in victories or in points will qualify for the final ten-race competition for the championship.

(INDYCAR)—Josef Newgarden won his second Indycar race of the year, holding off teammate Luca Filippi on the streets of Toronto.  The two finished ahead of three Penske drivers who finished 3rd, 4th, and 7th.  Sebastian Bourdais, who finished fifth, and Tony Kanaan, who finished sixth, broke up the Penske train of Helio Castroneves, pole-sitter Will Power, Juan Pablo Montoya.

obby Unser, his father Bobby, Al Unser sr., his son Al Jr., and Johnny Unser. Al Sr., won the 500 four times.  Bobby won it three times.  Al Jr., won the race twice.  Bobby and Al Sr., competed against each other for several years.  Johnny Unser, whose father started the 1958 Indianapolis 500 and who died in a practice crash in 1959 at the Speedway, competed against Robby in one 500.  The speedway says John and Robby competed in one race together.  Al Sr., and Al Jr., also competed against each other.  The five Unsers drove vintage cars from the Indianapolis 500 for a couple of ceremonial laps during the weekend’s activities sponsored by the Sportscar Vintage Racing Association. Theevent drew more than 500 classic racing cars, some a century old.

(LEMANS, FRANCE)—Porsche returned to the victor’s podium for the first time since1998 with a 1-2 finish in the LeMans 24-hour endurance race.  The Porsch 919 Hybrid uses a lithium-ion battery and a turbocharged V-4 engine. The win also was the first victory at LeMans for the three drivers who split the time behind the wheel:  NicoHulkenberg, Earl Bamber, and Nick Tandy.

The Porsche victory ended a five-year winning streak for Audi

Tony Stewart won his first race of the year, edging out Columbia native Carl Edwards in Sunday night’s 500 mile race at Atlanta Motor Speedway. Stewart, who has not won is 31 races, beat Edwards by 1.316 seconds.

Clint Bowyer finished the race in seventh and hold onto the 12th and final spot in the Chase. For Jamie McMurray to sneak into the playoff, the Joplin, MO native would need to win and pick up the 10 point bonus for most laps led and have Bowyer finish lower than 32.

Back in February, Jamie McMurray won the Daytona 500, he was on David Letterman and Regis and Kelly and was honored by Governor Jay Nixon, but since then finding wins or top finishes have been hard to come by for the Joplin, MO. native who sits 19th in the Sprint Cup Standings.

END_OF_DOCUMENT_TOKEN_TO_BE_REPLACED

A war of words or mostly a one-sided spat between Jamie McMurray and his teammate Juan Pablo Montoya has brewed over into the media. This comes after the two crashed during Sunday’s race at Las Vegas Motor Speedway.

END_OF_DOCUMENT_TOKEN_TO_BE_REPLACED 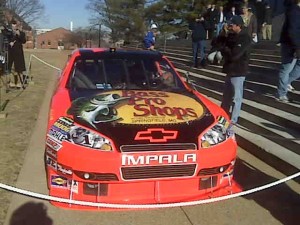 What a great idea! Have Jamie McMurray drive his #1 car from the Jefferson City airport to the South Lawn of the Capitol steps. So, I perched myself up on the steps on the west side of the Capitol and caught McMurray coming off Highway 54 heading east on Main Street.  Click here to see the video.