You are here: Home / Archives for Jacob Hummel

A St. Louis area lawmaker charged with felony stealing and seven misdemeanor campaign finance violations says he hasn’t decided whether he will resign his office. The House Democrats’ leader says he should. 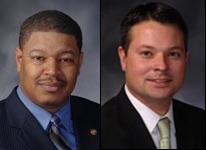 Charges were filed Wednesday against Representative Steve Webb (D-Florissant). The House Democratic Caucus issued a statement from Minority Leader Jacob Hummel (D-St. Louis), who said Webb told him he would resign later in the day. Webb then told media he has not made that decision.

Hummel has issued a new statement reiterating that Webb told him that because he faced serious criminal charges he would resign, and gave Hummel permission to tell the media that. Hummel says Webb even asked the minority leader’s staff to prepare the resignation letter.

Hummel in the latest statement says Webb should, “for the sake of his family and constituents … follow through with his original intentions.”

The charges say Webb solicited money for the Legislative Black Caucus, which he once chaired, and then put it in his own bank account. Other charges say he failed to report donations, made over-the-limit expenditures and mixed contributions with personal funds.

A St. Louis area representative has been charged with felony stealing for allegedly spending money meant for the Legislative Black Caucus on himself in 2011.

Representative Steve Webb (D-Florissant) is a former chairman of the black caucus. He also faces seven misdemeanor counts accusing him of violating laws governing the reporting and use of campaign finance money.

A statement from House Minority Leader Jacob Hummel (D-St. Louis) says Webb has told him that he will resign later today.

The misdemeanor charges say between November 2010 and October 2012 Webb failed to report more than $61,000, spent more than $40,000 in violation of spending limits, co-mingled more than $5,100 in campaign and other funds and converted more than $6,600 to personal use.

The man who will lead the Missouri House Democrats in the 2013 legislative session is St. Louis representative Jacob Hummel. He must deal with the largest House Republican majority in the history of the state. 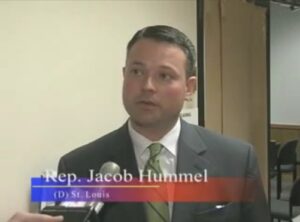 Hummel says despite that, his caucus will be relevant.

“Surely, if you want to look at the votes, we’re very much outnumbered, but I think it’s our job as members of the minority to hold the majority’s feet to the fire,” he says. “When we see something that we think is not in the best interest of the state, I think it’s our job to stand up and fight for those issues.”

The Republican majorities in both the House and the Senate are large enough to overturn a veto by Governor Jay Nixon, but Hummel says he doesn’t think the state is as conservative-leaning as the make up of the legislature might suggest.

“I think if you look at statewide, I think the state’s fairly well evenly divided, and I think that the majority should recognize that and I would hope that at some point they could learn to lean in that direction towards a more divided Missouri as we actually, I think, are,” Hummel says.

Hummel considers what he expects in working with the leader of that House Republican majority, House Speaker Tim Jones of Eureka.

A priority that House Democrats are already talking about is ethics reform. Hummel says the public doesn’t want or deserve unlimited campaign donations.

“I think that if it was polled anywhere, it’s obvious to anyone that campaign finance limits are needed, a limit on lobbyist gifts and to strengthen the Missouri Ethics Commission,” Hummel says.

That could include a return to provisions in a 2010 bill that was thrown out by the Supreme Court not because of its content, but because it was attached to unrelated legislation.

One issue the leaders of the two caucuses have expressed opposing stances on is education funding. Hummel says Missouri is among the states in the U.S. that spend the least on education and suggests that must change. House Speaker Tim Jones says the amount of money spent on education is not the issue, and says major reform legislation is needed.

The first debate on the House Floor over prevailing wage has seen tempers flare and no vote taken. 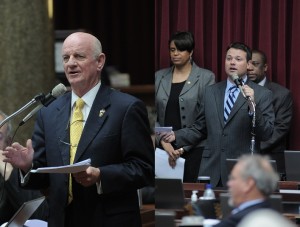 Representative Barney Fisher (R-Richards) says the ruling handed down by the State Supreme Court in March, 2011 in the case of Utility Services Incorporated versus the Missouri Department of Labor and Industrial Relations, several times, includes the word “confusing” and calls for a bright line definition between construction, maintenance and major alteration projects. He believes the Court was hinting that while it can not write legislation to redefine those terms, someone should.

Fisher says the current definition of “construction” in the prevailing wage law would include the painting of existing facilities. He says that has far-reaching effects when water systems have to be maintained, and equated it to a tax. “We all have to have water. So, senior citizens would be effected, the blind … low-income families, low-income individuals, single parent mothers, everybody who can least afford a tax increase in their water bills can hardly afford this.”

Representative Jacob Hummel (D-St. Louis City) says the bill will hurt the state’s laborers. He used the example of painters. “It seems to me like we’re going to give them around a $20 pay cut.”

Hummel says the desire to change the prevailing wage law stems from contractors not doing their jobs. “They’re too lazy to fill out their forms and send them into the Department of Labor like they’re supposed to do. If they did that we wouldn’t have this problem.”

Hummel confronted Fisher, saying the bill will force contractors to bid at prevailing wage to be competitive, an argument Fisher rejects. “You can’t show me in this bill where prevailing wage is cut.”

The legislation has been laid over.