You are here: Home / Archives for Invenergy

Expect some long days and nights at the Missouri Capitol in Jefferson City this week, with just five days left in the 2021 legislative session. There are still a number of major bills that are pending, including legislation on transportation, prescription drug monitoring, Wayfair legislation and eminent domain. 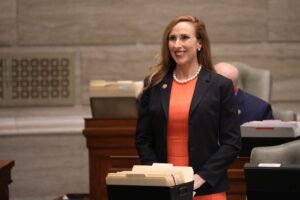 The session ends Friday evening at 6, under the state Constitution.

The gas tax legislation is the top priority for powerful Missouri Senate President Pro Tem Dave Schatz (R-Sullivan). Schatz’s Senate Bill 262 would increase Missouri’s gas tax by 12.5 cents per gallon, by 2025. The increase would be phased in by 2.5 cents each year.

Schatz, the Missouri Chamber of Commerce, the trucking industry and other supporters note Missouri’s 17-cent gas tax has remained the same since 1996. They also note that the state Department of Transportation (MoDOT) has had to dip into reserves for federal matching funds. The bill has bipartisan support. Opposition has primarily come from Republicans who oppose new taxes.

Schatz’s bill has received final approval in the Missouri Senate, and has been referred to the House Fiscal Review Committee. He’s hopeful that it will get to the Missouri House floor before Friday’s deadline.

Another key bill we’re watching this week is prescription drug monitoring program (PDMP) legislation from State Sen. Holly Rehder (R-Scott City). She’s filed PDMP for the ninth straight year: eight in the House and this year in the Senate. The bill has passed several times over the years, but it’s never been the same version in both chambers.

A PDMP is an electronic database that collects data on controlled substance prescriptions within a state. Missouri is the only state in the nation without a PDMP. 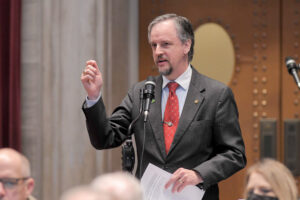 Rehder’s Senate Bill 63 would establish the “Joint Oversight Task Force of Prescription Drug Monitoring” within the state Office of Administration. Members would be selected from the Board of Registration for the Healing Arts, the Board of Pharmacy, the Board of Nursing and the Missouri Dental Board.

Rehder’s bill received final approval from the Missouri Senate in early April. It’s waiting for debate in the Missouri House. She and other supporters say 49 states currently have a PDMP, and that informed doctors make better decisions. Opponents, such as State Sen. Mike Moon (R-Ash Grove) worry about potential data breaches.

Governor Parson called on lawmakers to address Wayfair, during his January State of the State Address.

“I hope the House and Senate will consider legislation to address the unfair advantage online retailers have over small businesses in Missouri,” Parson told lawmakers in January. “I am a strong supporter of lower taxes- in fact, I have signed several tax cuts into law. However, our small businesses, especially in smaller communities, are getting crushed right now because they cannot compete with huge online retailers.”

Another key bill that could hit the Senate floor this week involves eminent domain and the Grain Belt project in rural northern Missouri. 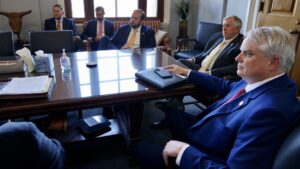 State Sen. Jason Bean (R-Holcomb) has filed Senate Bill 508, which has been heard by the Senate Commerce, Consumer Protection, Energy and Environment Committee. Under the bill, the Missouri Public Service Commission (PSC) could not issue a certificate of convenience and necessity for a merchant line, until county commissioners in each county through which the line will be built pass a resolution supporting the project.

Senator Bean’s bill is aimed at Grain Belt, also known as Invenergy. The PSC has approved their request to build, own and manage a high-voltage transmission line across eight northern Missouri counties. Those counties are Buchanan, Clinton, Caldwell, Carroll, Chariton, Randolph, Monroe and Ralls.

The PSC has determined there is a need for the service, and that the service promotes the public interest.

However, the Missouri Farm Bureau, the state’s largest general farm organization, has urged lawmakers to approve Bean’s legislation, saying it’s about protecting private property. Missouri Farm Bureau says using eminent domain for this project sets a dangerous precedent and “makes it easier for our state to become the transmission superhighway for the Green New Deal.”

Invenergy says this would be Missouri’s largest energy infrastructure project, and that it would support 1,500 construction jobs over three years. They also say it would deliver millions of dollars in annual energy savings for 39 Missouri towns, and would improve electric reliability to help avoid future emergency outages.

The Missouri House approved a bill related to Bean’s earlier this session.

One issue that we likely won’t hear much discussion on during the final week is gaming. State Sen. Denny Hoskins (R-Warrensburg), who chairs the Senate Economic Development Committee, told Missourinet last week that he doesn’t see a path forward for any gaming bill this session.

The Grain Belt Express project plans to run wind power transmission lines across eight rural counties in northern Missouri—from Buchanan through Ralls. Though the Public Service Commission has approved it and the commission’s approval won a court challenge, agricultural opponents have once again found support in the Legislature.

Disagreement over the power line projects pits farmers on the transmission route in the northern part of the state against county commissioners in the south, who expect the project to share electricity at lower rates.

Burrely Loftin, the Mayor of Ava Missouri told the Senate panel that his town of about three thousand could save as much as $267,000 a year.

“That’s a lot for a poor community like ours,” he said

Marilyn O’Bannon, a farmer and County Commissioner in Northeast Missouri’s Monroe County, said the powerline’s path is not fair:

“The proposed line runs through approximately five miles through the middle of all the farms my family owns, all tillable land,” she testified.

Farmer Dawn Ingles of Randolph County supports the Grain Belt Express, saying it will bring $700,000 a year in tax revenue needed for their schools. She added that it would help the power grid that suffered rolling blackouts.

Senator Bill White, a Republican and lawyer from Dade, Jasper and Newton counties, opposes the bill to block the project because he says the Grain Belt has already been legally approved – many times.

Tina Reichert, a farmer and Bed and Breakfast owner in Chariton County says properties in her family are getting overused for such projects

Invenergy spokeswoman Beth Conley issued a statement after the hearing:

“The bipartisan Missouri Public Service Commission unanimously approved the Grain Belt Express as a public utility project because of the tremendous public benefit it will bring to the Show-Me-State. Missouri’s largest energy infrastructure project will provide payments to landowners and local communities, support 1,500 construction jobs over three years, deliver millions in annual energy savings for 39 Missouri communities, and bolster electric reliability to help avoid future emergency outages. Over 40% of project landowners in Missouri and Kansas have already voluntarily signed easement agreements and received upfront payments from Grain Belt Express of more than $5 million.”

Ameren Missouri has announced that they’ve closed on the acquisition of its second wind energy center, a 300-megawatt (MW) project in northwest Missouri’s Atchison County. 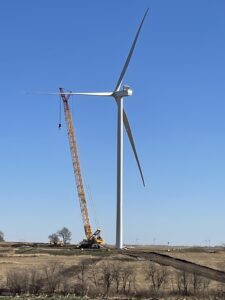 Ameren Missouri has
closed on the acquisition of its second wind energy center, a project in northwest Missouri’s Atchison County (photo courtesy of Ameren Missouri)

St. Louis-based Ameren made the announcement on Thursday, saying that renewable energy from the facility is reaching customers, as construction continues on some other project turbines.

About 100 MW are already in service, and Ameren Missouri expects an additional 50 to 75 MW by the end of March with more becoming operational this year.

The High Prairie facility is near Kirksville.

“Ameren Missouri is taking major steps forward in our transformation to clean energy, with the addition of these two large facilities. We’re planning for the long term with deep carbon reductions to achieve our goal of net-zero carbon emissions by 2050,” Ameren Missouri President Marty Lyons says, in a written statement.

He says Ameren will invest about $4.5 billion in 3,100 MW of renewable generation by 2030, including Atchison and High Prairie.

Ameren says part of the Atchison Renewable Energy wind project is being built by Invenergy.

Atchison County is in far northwest Missouri, near the Nebraska border. It’s a rural county, with some of the most productive farmland in the state. This is the fourth utility-scale wind energy facility in Atchison County, which will soon have a combined wind generation capacity of 800 MW, more than any of Missouri’s 114 counties.

There are several other wind farms in northwest Missouri.

The former Tarkio College closed in 1992, after more than 100 years as a four-year liberal arts school. It reopened in January 2020 and is focusing on three fields: wind energy, plumbing and welding.