You are here: Home / Archives for immigration

The U.S. Senate has begun debate of immigration reform legislation billed by President Obama as bipartisan, fair and common-sense. 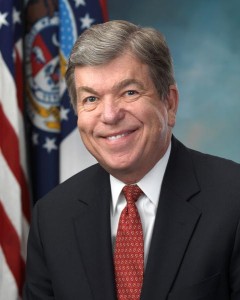 “One is securing the border, two is what are the legitimate workforce needs of the country and how do you meet those workforce needs and three is what do you do with people who came to the country illegally or stayed illegally. My view continues to be that the American people will deal with two and three in a very responsible way if they think the government has figured out how to deal with 1.”

Blunt acknowledges that border security has improved now than it was five years ago, but says it can be tighter.

Blunt says he will co-sponsor an amendment that requires at least 90 percent of everyone crossing the border needs to be stopped. He says he will also sign on to two other amendments.

The main tenants of the legislation will create a “pathway to citizenship” for undocumented immigrants who have a clean criminal record and are employed. The bill would also modernize the legal system governing the immigration process.

A Valley Park ordinance ( Gray v. Valley Park, Missouri ) aimed at cracking down on businesses hiring illegal immigrants has been upheld by a three judge panel of the Eighth Circuit Court of Appeals. In a 3-0 ruling, the court affirmed a district court ruling affirming that the St. Louis suburb had the right to enact such a law.

"We now have an affirmation of the lower court decision that the Valley Park ordinance is completely legal and constitutional," said Kobach in an interview with the Missourinet. "And it has consequences both for the state of Missouri and nationwide."

Valley Park’s ordinance requires businesses to use a federal worker verification program known as E-Verify to maintain business licenses, a component of the state law.

The impact of this decision to any community or state, anywhere in the country, is that such laws are legal and constitutional.

The American Civil Liberties Union and others that took Valley Park to court have the option of appealing this ruling to the entire Eighth Circuit Court or directly to the United States Supreme Court. 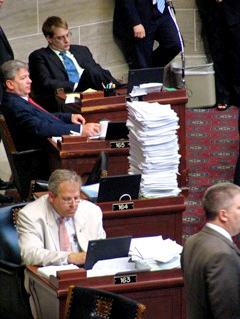 Legislation cracking down on illegal immigration is on its way to Governor Matt Blunt (R-MO) after being given final approval in the Missouri Senate.

Among other things, HB 1549 would require applicants for state benefits to provide proof of citizenship, residency, or lawful presence in order to receive those benefits. If applicants cannot provide this proof they could sign an affidavit attesting to their status and would be eligible to receive temporary benefits until their status can be determined.

The legislation also bars employers from knowingly hiring illegal aliens, with violators subject to the suspension of their business permits and licenses. And, Senator Scott Rupp (R-Wentzville), the Senate sponsor, says employers will be subject to fines if they fail to complete the required paperwork for employees.

In addition, the Department of Revenue would not issue any driver’s license to illegal aliens nor to anyone who could not prove lawful presence. Written tests for commercial licenses shall only be administered in English.

Governor Matt Blunt (R-MO) sends a warning to members of the Legislature, telling lawmakers there will be a special legislative session if the General Assembly fails to pass a significant bill dealing with illegal immigration in Missouri.

The Governor’s spokesman, Jessica Robinson, says this is consistent with Blunt’s position on illegal immigration. She points out the Governor announced, this week, that his directives have led to the detainment of 250 illegal immigrants in the state.

Among other things, Blunt has called for legislation to strengthen Missouri’s laws to prevent illegals from obtaining driver’s licenses and tough new penalties for anyone who tries to help illegals obtain driver’s licenses. A bill cracking down on illegal immigration is currently making its way through the General Assembly, with the session ending Friday at 6 pm.

Blunt has given no indication when that special session, if called, would be held.

Illegal immigrants wouldn’t be allowed to receive public assistance in Missouri under a bill that has passed the House and now heads to the Senate.

It’s a simple bill that causes a lot of rancor in the House. Representative Michael Brown (D-Kansas City) challenges sponsor Ed Emery (R-Lamar). Local and state public assistance would be denied illegal immigrants unless mandated under federal law. Brown contends that Emery’s measure, HB 1626 , would intimidate illegal immigrants and keep them from seeking the help they need, even emergency medical help.

Rep. Mike Daus (D-St. Louis) worries about the impact on children in the US illegally, because of their parents. He argues many children of illegal immigrants call America their home, because it’s the only home they have ever known.

Emery argues Missouri taxpayers can’t be expected to provide assistance to those not in the country legally.

An anti-illegal immigration bill has won tentative approval in the House, with much of the debate focused on whether Missouri has an unofficial sanctuary city.

Rep. Jenee Lowe (D-Kansas City) says her city has been unfairly tagged as an unofficial sanctuary city, because police there care more about solving crimes than checking immigration records. She says that 20 years ago, Kansas City had a different police chief with a different philosophy which made residents unwilling to call police.

"The homicide rate, as testified by the captain, was very high," Lowe tells colleagues during House floor debate, "And I don’t know if he used the word ‘war zone’, but he painted the picture of a war zone."

Under the bill, sanctuary cities wouldn’t be allowed in Missouri. Onder says that cities which declare themselves sanctuaries for illegal immigrants can even block the investigation of crimes committed by illegal immigrants and keep federal officials from deporting criminals.

The bill also would require Highway Patrol troopers to be trained in enforcing federal immigration laws. The citizenship of those under arrest would be determined. It would keep driver licenses out of the hands of illegal immigrants and punishes those who traffic driver licenses to illegals.

Public colleges in Missouri would be prohibited from enrolling illegal aliens, and would have to satisfy the legislature that they aren’t doing so, before getting any money from the state under a bill advancing in the House.

Rep. Jerry Nolte (R-Gladstone) defended his bill against criticism by Rep. Paul LeVota (D-Independence) who asserted enforcing immigration laws is a federal issue, not a state one. LeVota told Nolte it would seem that colleges willing to enroll illegal aliens in violation of federal law wouldn’t care all that much about state law.

Nolte responded, “Because they would be standing before an appropriations committee answering for that.”

Nolte’s bill, HCS#2 HB 1463 , would require public college officials to certify to the House and Senate budget committees that they haven’t knowingly enrolled any illegal immigrants before the legislature would release money to their institutions.

During House floor debate, several state representatives criticized the measure as a veiled attack on immigrants, bordering on racism.

Rep. Kevin Wilson (R-Neosho) tired of arguments against the bill, asserting it merely upholds the law against those here illegally, “The folks back home ask me that all the time; what part of illegal do the people in Jefferson City not understand?”

The bill needs another favorable vote to move to the Senate.

Federal agents say they have broken up a ring in St. Louis that might have provided false identification materials to illegal immigrants.

All of those arrested are from Mexico. Agents say they got a computer and a laminating machine in a raid on a Maryland Heights house, and found evidence the equipment had been used to make fake drivers licenses, Social Security cards, and permanent resident cards.

Hispanic-American groups in Kansas City are demanding Governor Blunt fire his chief of staff for making a remark they call racist and demeaning to immigrants.

Governor Blunt says Chief of Staff Ed Martin was just demonstrating the administration’s tough position on illegal workers when he made the remarks to the Missouri Housing Development Commission. The Coalition of Hispanic Organizations, made up of 18 groups and individuals, says Martin told the Development Commission every developer could, as he put it, "figure out who is illegal….there’s a bunch of Mexicans out there, some of them are probably not legal."

The President of the coalition, Rita Valenciano, says it is an outrage for Blunt’s Chief of Staff, speaking for the Governor, to say Mexican looking people are likely illegal immigrants. Blunt has told a news conference in St. Louis that Martin was responding to a developer he thought was making excuses.

What if you had a debate on economic development and an argument on illegal immigration broke out?

House Democrats irritate Rep. Ron Richard (R-Joplin) by pressing to negotiate further with the Senate to add a provision which would withhold tax credits to any business hiring illegal immigrants. Richard insists it’s not needed. He says it’s already in the bill. When Democrat leader Paul LeVota of Independence challenges Richard as to where it is in the bill, Richard tells him he can read the bill and find it.

LeVota and Democrats in the House contend that provisions calling for tax credits to be stripped from businesses using illegal immigrants apply only to key sections of the bill, such as those referring to the Quality Jobs program. They say it needs to be broadened to include all tax incentive programs. Democrats also say a loophole exists that would allow a contractor to escape punishment if subcontractors he employed hire illegal immigrants.

Democrats further contend that Governor Blunt, a Republican, only wants to talk about illegal immigration, but doesn’t want to really do anything about it. Republicans counter by noting state law already holds businesses liable for using illegal workers. Rep. Tim Flook (R-Liberty) reads from the statutes during House floor debate. Flook says the law is there, it just hasn’t been enforced. He and other Republicans say Democrat Jay Nixon, the State Attorney General, and Democrat Susan Montee, the State Auditor, could enforce what’s already law and haven’t.

Republicans rejected the attempt to take the bill back to conference, which would have prolonged the special legislative session. After that minor political scuffle settled, both sides overwhelming voted in favor of the $70 million economic development bill, which was the main focus of the special session. They then went home.