You are here: Home / Archives for Ike Skelton Training Center

Archaeologists have been back on the grounds of the Missouri National Guard’s training site at Jefferson City studying the site of a 1,200 year-old Native American village there. They were looking for signs that the site might not be a seasonal camp as been believed, but a more permanent site. 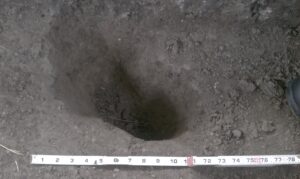 Archaeologists at the Ike Skelton Training Center at Jefferson City discovered three post holes, indicating a possible home or other permanent structure at a 1,200 year-old Native American village site. Two of them, which overlap, are pictured here.

Archaeologist Joe Harl with the Archaeological Research Center says they found some in the form of pit structures.

“Pits are features or remains of house structures or storage pits, cooking pits, fire hearths, those kinds of things. What we found are the remnants of three posts that probably are related to a house or some other activity.”

Harl says other findings on the site would also indicate that this site was used more than just seasonally. 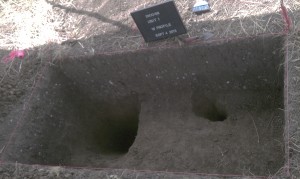 Two post holes overlap in the upper-right of this plot. Archaeologists dug out a third post hole, at the left looking for evidence of earlier habitation.

“When you’re getting a number of pottery vessels for instance, you’re not going to be carrying those around with you. At a special processing site you may have some pottery vessels but not that quantity we’re finding, and then the number of tools we’re finding also suggest that it was a permanent village site.”

Harl says the site is well-preserved because it is under about two feet of sediment deposited by Missouri River flooding, and topsoil that was farmed for 150 years.

“It’s been cut a little bit but not too much because of all the flood deposits on top of it, and so this looks like it could have intact remains that you don’t see, and the bone preservation and the plant preservation was really good at this site as well.”

The bones he refers to are animals bones, that combined with the plant material, show what the people there were eating and raising.

AUDIO:  What were the people at this site eating?

Harl says though none have been found, he believes there are “definitely” human burials at the site.

AUDIO:  Harl discusses the possibility that human remains exist at the site. 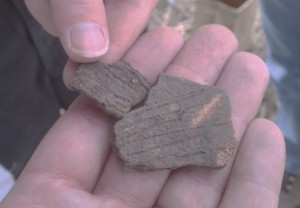 The markings on these fragments of pottery are thought to have been left by cords use in their production. Numerous pottery fragments have been found at the National Guard training center site, and are among the evidence that it was more than a seasonal campsite.

“The points we’re finding we know dated after 700 A.D. when they developed the bow and arrow … The pottery, though, looks like it dates to about 1000 A.D.” The pottery fragments that have been found have either smooth sides, uneven marks made by cords used in their production, or even cord markings. Those markings, or lack thereof, help indicate their age.”When they smoothed the upper rim, they started doing that about 950 A.D. or after that time. After about 1050 or 1100 A.D. they actually would sometimes smooth the whole vessel and then put in size lines, like one of the ones that we found.”

No remains of ornately decorated pottery have been found, and that is also telling.

“Those really fancy pots with animal head effigies on them or fancy incisions or lines drawn in them … those usually occur at the bigger sites, the market centers, where at the common, everyday farming sites, they tend to keep using that cord marked pottery. That’s because those vessels work better at cooking foods in better than the big, rounded, flat-bottomed fancy pots that were more popular at the big market centers.”While people often think of Native Americans as being associated with specific tribes, Harl says it is very difficult in Missouri to tie a site to any specific group.

“The problem is, especially for the eastern half of the state, is that people left this area and it’s a real mystery because from right at the end of the Ice Age when people first came here until 1,400 A.D., this area had some of the highest populations in the country because of all the natural resources and the right deposits and food deposits that are here. This area always had a high population and the real mystery is why in 1,400 A.D. they abandoned most of eastern Missouri.”

AUDIO:  Harl on the prehistoric exodus from Missouri.

Harl says some large projectile points found at the site might indicate that it was used as much as 4,000 years ago, but digging deeper into the soil for evidence of habitation that far back has so far yielded none. He says further investigation into that possibility is needed.  He adds, large points can be deceiving.  They are typically associated with spears and were phased out with the advent of the bow and arrow, but reemerged in later cultures for use as hafted knives.

Follow this link to a previous story on this site, including a set of photos of some more artifacts found there.

Between the Missouri National Guard’s Ike Skelton Training Center and Algoa Correctional Center, out in a field on Guard property and about a meter beneath the surface of the earth lie the possible remnants of a Native American settlement.

The site is believed to have been occupied off-and-on as early as about 800 A.D. until about 1200 A.D. according to Regina Meyer, Cultural Resource Manager for the Guard. Meyer has a background in archaeology and has been doing unfunded work there on a volunteer basis.

She says the village was what archaeologists call a “multi-component site: It was used and abandoned, used and abandoned and over the years…I’m talking many years…people would pick up the habitation again. The layers would deposit on top of each other, and you’d have some flooding because it is right on the (Missouri) River in the bottomland.”

Only a few, one meter square pits have been opened. Meyer says its overall size remains unknown, but she guesses it takes up about 20 acres of the 80 acre field.

The people there were most likely living by hunting, fishing and gathering, and using the nearby Missouri River for transportation. Digs have turned up hearths, trash pits and artifacts as much as three feet down, which Meyer says indicates long-term occupation. “If we can just locate some post molds, I think we’ll have our proof.” Those molds would be evidence of homes or other more permanent structures.

Most of those artifacts have been churned up by 70 years of farming; in part of that time by the inmates at Algoa.

Still, Meyer says a lot of interesting artifacts have been revealed including arrowheads, ceramics and faunal remains, which provide evidence of what food the people ate. Stone tools include drills, scrapers for treating animal hides, and a spokeshave which is used to straighten wooden shafts for use in things such as arrows. She estimates about 40 tools have been found, along with the flakes of chert that result from production.

The amount of pottery coming from the site is the most Meyer says she has seen from any Guard property in the state. “The amount that we get from each unit in each level, the largest percentage of artifacts we have is ceramic…the ceramic pottery. And, the different types with the different decorations is quite a lot.”

No human remains have been discovered, and Meyer does not anticipate finding any.

The village isn’t the oldest site on the Guard’s property in the area.  Meyer says higher up and further away from the River is a place that was used by humans in the Early Archaic period (ca 7500-6000 B.C.).

It was studied three years ago and yielded a few artifacts.  Meyer says, “It was probably intermittently used…seasonal.  It wasn’t a permanent site.  More the hunter-gather culture.  It wasn’t really closely related to the site below.” Its presence says something about the overall property, however.  “The area is an excellent area for food procurement and travel, once again, with the Missouri River right there.”

Meyer is involving area youth in her work. In each of the last two autumns, she and others have worked in the field for about a week at a time. After excavation pits are opened up and the material from them is gathered into five gallon buckets, students from area middle schools sift through it to recover the artifacts. “Then they have the excitement and the education of seeing the artifacts for the first time. We teach them about what archaeology is and all the methodology involved with it.”

As for the site’s long-term future, Meyer hopes to continue bringing students out for the field school. “Archaeology is the educational tool for our future. If students know how to protect archaeological sites and know our history and our past, then I think it’s wonderful.”

However, if the funding were provided Meyer would like to expand the work to “…a true phase 1 archaeological site to know the boundaries of the site and find more information, and have something officially written up. But, I’d always like to offer the educational outlet for the students”

Teachers who would like the opportunity to bring a class to the site should contact the museum or the Environmental Office at the Missouri Army National Guard.

Those who want to see the artifacts will find them at the museum on the Training Center grounds.  See a few of them in the picture set below (click the button in the lower-right to see a full screen picture viewer).