You are here: Home / Archives for I-44 in Jasper County 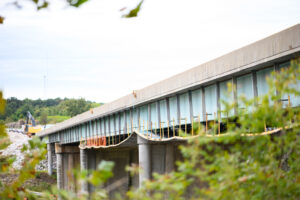 Governor Mike Parson (R) is concerned about a new study, which says Missouri has the eighth-worst roads in the nation. He tells our Joplin affiliate KZRG (AM 1310) that it’s important to change that.

Truckers and motorists along heavily-traveled I-44 near Joplin may have noticed the governor and television camera crews today, along with dozens of highway workers. Parson spoke to KZRG’s Ty Albright at the I-44 bridge over Shoal Creek, which was built in 1956. The governor says it was in poor condition.

“Just making sure that the public is aware of what’s going on and how we’re spending the money and why it’s so important that we keep these bridges and our infrastructure up,” says Parson.

State lawmakers approved the governor’s $350 million bridge bonding plan this year, which is aimed at repairing or replacing 250 deteriorating bridges. The two I-44 bridges are being replaced, using that funding.

Thousands of trucks cross the two bridges each year.