You are here: Home / Archives for Hyperloop

An effort to bring a Hyperloop to Missouri has picked up some steam again. The Missouri House passed this week legislation that would add the ultrafast tube travel system to the list of projects that could be funded through public-private partnerships, like ports and light rail systems are. 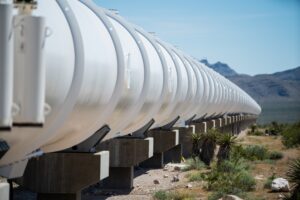 Think of a Hyperloop like the cylinders you put your deposit in at the bank drive thru. The vacuum-like system whisks the container through a tube to a bank teller in a matter of seconds.

A Hyperloop is said to haul passengers in a much larger version of the vacuum-like system and go up to 640 mph. Hyperloop officials say travelers could get from St. Louis to Kansas City in about 30 minutes.

The end goal of some legislative supporters, including House Speaker Elijah Haahr of Springfield, is to build a roughly 250-mile track from St. Louis to Kansas City – a project that could cost about $10 billion. Elected leaders have said a Hyperloop is not an effort the state is going to pick up the tab on. Instead, it would need to be headed by a private firm.

Rep. Travis Fitzwater, R-Holts Summit, says both Kansas City and St. Louis have made the top 10 of Virgin Hyperloop’s list of places it’s looking to build a 15-mile test track. The track could help federal regulators decide whether the system can be certified and used commercially to carry passengers and cargo.

Fitzwater says his bill would also ban the government from taking private land to build a 15-mile test track in Missouri.

“I think it was important, but honestly I don’t think impacted the bill that much. That’s why we passed it with that piece on it to dissuade concerns from members of our caucus in particular that had a real issue with being consistent,” he says.

Some Democrats voiced concern that banning eminent domain would create roadblocks to getting a certification track built.

The measure, House Bill 1963, is headed to the Senate. Sen. Caleb Rowden, R-Columbia, is expected to carry the bill.

Is flooding a problem for a potential Hyperloop in Missouri?
https://wp.me/p16gMv-vjP

Engineers rally around study about transporting Missourians through tubes
https://wp.me/p16gMv-sp9

Coalition hyped up about tubes taking you from KC to St. Louis in 31 minutes
https://wp.me/p16gMv-sfe

A task force says a high-speed tube travel system – like a Hyperloop – is estimated to create up to $3.6 billion annually in economic impact and create as many as 17,200 new jobs in Missouri. The group’s 176-page report released today also says the travel network could reduce I-70 vehicle crash injuries and fatalities up to 50%. 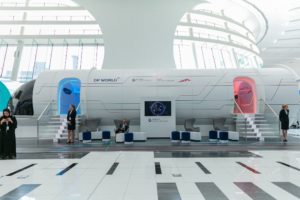 “What has to happen initially is a certification track, that would be between ten and twelve miles long, that would allow the system to reach maximum speeds, that would test it under various conditions and where the national regulators, the federal DOT, could come and certify it for human safety,” says Smith.

Virgin Hyperloop One has a one-mile test track in the Nevada desert with a non-commercial sized pod reaching test speeds up to 245 mph.

A Hyperloop is said to have the ability to haul passengers by as much as 670 mph from Kansas City to St. Louis in about 30 minutes. The cost for a test track, which Smith says would be mostly private funding, is estimated to be roughly $300 million to $500 million with the goal of building the site in one to two years.

He says the reason why Missouri should lead the charge of a test track instead of leaving it to Virgin Hyperloop is that launching a new mode of transportation requires government involvement to regulate and certify. He also says a Hyperloop would likely intersect and connect with other forms of transportation.

Smith says a Hyperloop would move things faster and cheaper.

In early November, Virgin Hyperloop One plans to submit a Request for Proposals for the construction of a certification track and make a decision on the bidding process in early 2020. The location of a recommended test track is up in the air. The task force estimates a full 250-mile Hyperloop track along Interstate-70 would cost about $7 billion to $10 billion and be mainly privately funded.

“I would look to sovereign funds – you know sovereign investment funds, major international hedge funds, major infrastructure investment groups,” says Smith. “There are pretty well-known players out there that are not shy about how much money they have to bring to the table.” 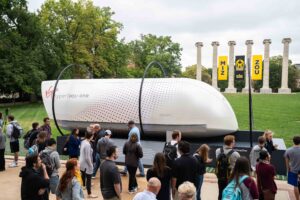 Photo courtesy of Virgin Hyperloop One

Another critical piece of the report recommends that the University of Missouri system partners with several universities to form an international research center. The report says the project must get $50 to $100 million for research and development within the next three years.

Lt. Governor Mike Kehoe and Missouri House Speaker Elijah Haahr of Springfield are both releasing details of the report during stops today in Kansas City, Columbia and St. Louis.

Is flooding a problem for a potential Hyperloop in Missouri?

Coalition hyped up about tubes taking you from KC to St. Louis in 31 minutes