The spread of COVID-19 has set in at the Missouri Capitol – one week into the legislative session. A statement from Missouri House Republican leadership says due to the rising number of cases in the building, the lower chamber will not be in session next week. 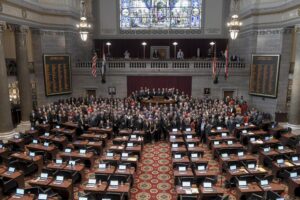 House Speaker Rob Vescovo of Arnold, Speaker Pro Tem John Wiemann of O’Fallon, and Majority Floor Leader Dean Plocher of St. Louis say the move is out of an abundance of caution to protect members, staff, and visitors.

This week, Sen. Greg Razer, D-Kansas City, and Rep. Keri Ingle, D-Lee’s Summit, announced they are quarantining after being exposed to someone carrying the deadly virus.

On Tuesday, Missouri House Democrats offered up a proposal to require all members to wear a mask while on the floor because some members, often Republicans, choose not to wear a mask and follow COVID-19 safety guidelines. The plan was voted down.

The House is made up of 114 Republicans and 48 Democrats.

Media reports say members of the Senate Republican Majority Caucus are discussing Friday whether to also take a break. 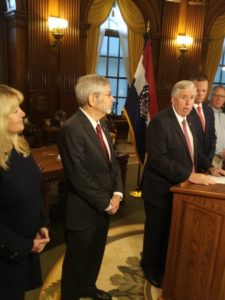 “If you talk to any county, any city police department, especially St. Louis (and) St. Louis County, you’re hundreds of people short of being able to put them in uniforms,” Parson says. “Simply because people are not wanting to work in that arena.”

Governor Parson says it’s important to “have the officers’ backs,” saying they are the front-line defense for Missourians.

He’s signed legislation into law, that gives Missourians the opportunity to obtain “Back the Blue” license plates. The plate is entirely voluntary.

State Rep. Sara Walsh, R-Ashland, who chairs the House Subcommittee on Appropriations for Public Safety, sponsored the “Back the Blue” bill, which was House bill 898.

Walsh spoke at the recent license plate unveiling ceremony, noting that a $10 donation will be collected from each license plate applicant for the Missouri Law Enforcement Memorial Foundation.

“This will help ensure the memorial that stands behind us (near the Capitol in Jefferson City) continues to stand in memory of Missouri’s fallen law enforcement officers,” says Walsh. 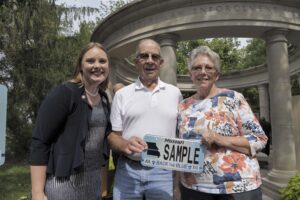 The memorial is located on the river side of the Statehouse.

“This license plate I think will do a lot to help out our men and women in blue, and I’m just honored to be part of this ceremony,” Wiemann says.

Walsh became choked-up during the ceremony when she introduced David and Beverly Thomas of Rocheport. They are the parents of former Columbia Police Officer Molly Bowden, who was killed in the line of duty during a 2005 traffic stop.

Missouri’s governor traveled to Sedalia this weekend for a ceremonial signing of legislation that supporters say will benefit agriculture. 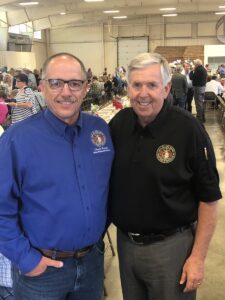 Governor Parson praises lawmakers for approving the bill, saying it signals that Missouri supports the next generation of agriculture.

“We’ve now opened the doors that will allow Missouri to lead the way in meeting a growing world food demand and ensure we keep more agriculture production in our state, strengthening Missouri’s number one industry,” Parson says.

The governor notes Missouri agriculture is an $88 billion industry, and remains the state’s top economic driver.

Critics of the legislation say this will prevent counties from protecting water and air.

The Missouri Rural Crisis Center’s Tim Gibbons spoke to our sister network Brownfield in May, saying lawmakers should be standing up for Missouri’s 100,000 family farms, not the approximately 500 concentrated animal feeding operations, known as CAFOs.

“We know that DNR (the state Department of Natural Resources) cannot and will not protect us from these absentee controlled operations,” Gibbons told Brownfield in May. “So local control is one way that farmers and people in rural counties have been able to put safeguards on these type of operations to protect the property rights, the property values, the water and air, the livability of our communities from industrial livestock operations.”

State Rep. Doug Clemens, D-St. Ann, who voted against the bill, told lawmakers in May that the CAFO operations are managed by owners who aren’t from the area.

“This isn’t about our family farms,” Representative Clemens said during House floor debate in May. “This is about corporate controlled industry, half of which is foreign-owned.”

SB 391 also establishes the Joint Committee on Agriculture, which will study the economic impact of Missouri’s agricultural industry and will study ways to create incentives to encourage farmers to adopt best practices to scientifically address the state’s carbon footprint.

The new law is scheduled to take effect on August 28.

Legislation that would ban abortions once a fetal heartbeat is detected is the top priority for Missouri House Speaker Pro Tem John Wiemann, R-O’Fallon, during the 2019 session’s final two days. 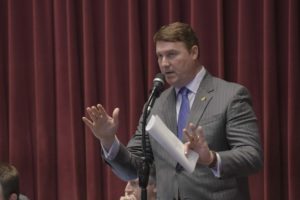 Transportation funding and redistricting are the other two main priorities for Wiemann. Mandatory adjournment for the Legislature is Friday evening at 6, under the state Constitution.

Pro Tem Wiemann hopes the Senate passes the heartbeat bill, which also requires abortion providers to increase the minimum amount of required medical malpractice insurance from $500,000 to $1 million per occurrence.

“I’m hopeful that they (Missouri Senate leaders) will finally bring it to a vote and we will move on and be a state that has one of the strongest pro-life bills in the country,” Wiemann says.

Anti-abortion state senators who are part of the Senate Conservative Caucus say there is an impasse in the Missouri Senate.

GOP Governor Mike Parson held a Statehouse press briefing on Wednesday where he called for a Senate vote, telling reporters that “the unborn deserve an up or down vote.”

“I mean this is a horrible piece of legislation. I mean, you’re talking about allowing for men and women to be forced to have a child even if it’s rape or incest. And then physicians going to jail, with a felony D charge,” Nasheed tells Senate colleagues.

The House approved the legislation in late February.

Meantime, transportation and infrastructure funding is another top priority for Wiemann, in the final two days.

While lawmakers have included funding for Governor Parson’s bridge bonding plan in the budget, Wiemann notes the General Assembly must also pass the underlying bill.

“I think we have a good compromise that we put together in the House and the Senate and I’m hopeful that they (Senate leaders) will bring that bill up as well,” says Wiemann.

Wiemann tells Missourinet the bill before the Senate contains a combination of transportation bonding and funding, adding that bonding is necessary for some matching funds from the federal government.

While the Legislature has included about $350 million in bonding money in the recently-approved budget, Pro Tem Wiemann says lawmakers must approve the statutes to enact that.

“Part of the puzzle has been done but we need to finish the puzzle by passing this legislation to enable it, the funding,” Wiemann says.

He also supports what he describes as redistricting reform, which he says has “less of a chance of passing” but hopes it’s approved by the Senate.

This involves Amendment One, which was approved by Missourians in November.

Under Amendment One, a state demographer would draw state legislative districts. Wiemann says modifications need to be made to that provision. Democrats who support Amendment One oppose changes, saying 62 percent of Missouri voters approved the measure in November.

As for other legislation, Wiemann says time is the biggest factor now, saying that good bills could potentially “die on the vine.”

Click here to listen to Brian Hauswirth’s full interview with Missouri House Speaker Pro Tem John Wiemann, R-O’Fallon, which was recorded on May 15, 2019 at the Statehouse in Jefferson City:

The Missouri House voted Monday afternoon in Jefferson City to approve a second piece of legislation aimed at attracting a $1 billion expansion at the General Motors plant in Wentzville, and one also aimed at ending a Senate filibuster. 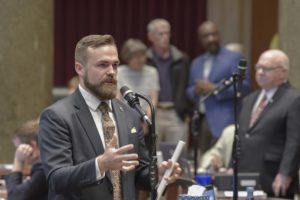 The House voted 114-31 to approve legislation from State Rep. Nick Schroer, R-O’Fallon, which does not include the Fast Track provision. Fast Track is a top priority of Governor Mike Parson (R), which allows Missourians to receive advanced training in high-demand areas.

“We did discuss including a provision in here which would ultimately not allow the tax credits to go into effect if the company fails to retain 90 percent of the amount of employees employed on the date of the execution,” Schroer says.

Schroer, who also voted for the first bill on Thursday, tells House Speaker Pro Tem John Wiemann, R-O’Fallon, the second bill is aimed at giving the Senate another option.

“You know it’s something that I think, not only your (the Wiemann legislative) district, my district, but I think everybody in the state will benefit if not only GM invests $1 billion, but we have programs out there such as the underlying bill,” says Schroer.

The underlying bill Representative Schroer refers to is sponsored by State Sen. Wayne Wallingford, R-Cape Girardeau. It would also allow the state Department of Economic Development (DED) to require a qualified business to repay benefits if the business fails to maintain the new or retained jobs, within five years of receiving approval of benefits.

Schroer says the bill is an incentive package for anyone willing to invest in Missouri.

“Have them come talk to the Department of Economic Development, and I can guarantee you that they’re going to try to work something out. If you’re willing to invest $1 billion in our state, we’ll try to see what we can do to compete against these other states to ensure that’s here in the Show-Me,” Schroer says.

Meantime, a filibuster continues on this Tuesday morning in the Missouri Senate, after the House approved the second version, one that supporters hoped would prevent a filibuster.

That version included a package that would give $5 million per year in tax credits over ten years to automakers that invest at least $750 million in plant upgrades, and would provide tax credits earlier in a business expansion. That version also includes Fast Track.

DED Director Rob Dixon tweeted this weekend that he met with GM on April 25, and that the company asked for workforce and infrastructure support, and asked DED to advance the full legislative package, including Fast Track and what’s known as “Deal Closing.”

Dixon’s weekend tweets also note that no decision has been made by GM, and that Missouri can secure the long-term viability of the plant with the full legislation. Dixon also says the governor’s proposal benefits industries in all corners of Missouri.

Both House versions are aimed at landing the $1 billion expansion in Wentzville, one of Missouri’s fastest-growing cities.

The GM plant in Wentzville has about 4,600 employees.

According to documents provided by Governor Parson’s office, the upgrades to the plant would not immediately create new jobs but would ensure that production remains in Wentzville long-term. The documents also say GM has 178 suppliers across Missouri, with the broader impact of the plant supporting more than 12,200 jobs statewide.

The plant produces vehicles such as the GMC Canyon and the Chevrolet Colorado.