The Missouri House voted Friday afternoon in Jefferson City to give final approval to a $35.2 billion state operating budget, after some heated discussion earlier in the day about feral hogs and other issues relating to the Missouri Department of Conservation. 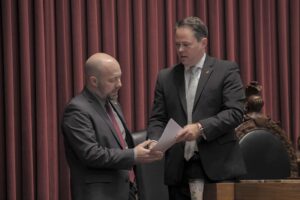 The budget is now in the Missouri Senate, which must approve it by 6 p.m. tonight.

The bipartisan funding for the plants is aimed at helping them address supply chain disruptions and to mitigate health and environmental impacts as a result of the pandemic.

It also includes $2 million for the Missouri Lottery to advertise. The original House budget cut it to $100,000, but the Senate allocated $3 million. Budget negotiators settled on the $2 million.

There was also heated discussion today on the Missouri House floor, after State Rep. Deb Lavender, D-Kirkwood, blasted the Senate, saying they took $100,000 out of the budget for hungry women/children. Lavender called that decision shameful.

State Rep. Hannah Kelly, R-Mountain Grove, and Representative Lavender then had a heated discussion about “setting the record straight”, but disagree on what that record is. They spoke over each other at times.

Ross tells the House that employee would have “harassed” feral hog hunters at the Mark Twain National Forest.

Normally, the Missouri Capitol’s public fourth-floor galleries are packed with lobbyists and schoolchildren, during budget debate. However, due to COVID-19 concerns, there was just one person observing today.