You are here: Home / Archives for House Bill 508

Legislation boosting criminal penalties for those who knowingly release feral hogs into the wild is heading to the Missouri Senate, after receiving final House approval on Thursday. The bipartisan vote was 108-38. 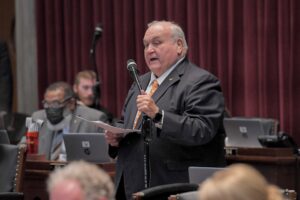 “When you have groups like the (Missouri) Farm Bureau and the (Missouri) Department of Conservation and soybeans and corn all working together and saying let’s give this a try. Let’s do everything we can do to help eradicate an invasive species,” McCreery says.

Feral hogs are a major issue across southern Missouri, especially in and near the Mark Twain National Forest. Governor Parson has been warning that feral hogs are a danger to the state and pose serious safety risks to residents.

State Rep. Scott Cupps (R-Cassville), who voted for the bill, tells colleagues that it will be tweaked in the Senate to address concerns from some House members.

The bill is also backed by the Missouri Parks Association (MPA), which says some residents are transporting and releasing feral hogs on public land. MPA says feral hogs are destroying Missouri’s native ecosystems, and have damaged the Taum Sauk, Roaring River and St. Francois state parks.

Congressman Smith, who represents 30 southern Missouri counties, says the majority of the feral hogs in Missouri are in his 8th Congressional District.

“We hope to have them eradicated one day, they’re awful. The best feral hog is a dead feral hog,” Smith told Missourinet in late March.