The Missouri House Democratic leader describes the Show-Me State as a microcosm of the nation for the Democratic presidential primary. 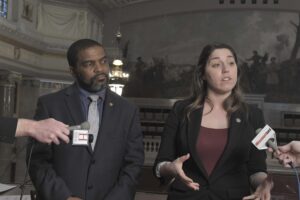 The primary is taking place on Tuesday, along with Missouri presidential primaries in the Republican, Libertarian, Green and Constitution Parties.

House Minority Leader Crystal Quade, D-Springfield, tells Capitol reporters in Jefferson City that there are a lot of progressive pockets in Missouri, along with rural areas.

“For us as the Democratic House caucus we’re always balancing how do we increase voter turnout for our base and make sure that those issues are highlighted, while still reaching out to the rural (Missouri) voters and making sure that those topics are part of the conversation too,” Quade says.

Leader Quade says it’s a balance, adding that the Democratic Party is having that discussion nationwide.

“What makes me proud to be a Democrat is both of these policy perspectives (progressive and rural areas) fit under the big tent of our party, so for me whoever wins is who I am going to be supporting,” says Quade.

As the Democratic Floor Leader, Quade does not endorse in any primary. She emphasizes the importance of unity.

He says it’s important for Democrats to unite and support the eventual nominee.

Missouri’s local election officials are projecting about a 40 percent voter turnout for the presidential preference primary.