You are here: Home / Archives for Holcomb

Four southeast Missouri Republicans are running in the August GOP primary to replace veteran State Sen. Doug Libla, R-Poplar Bluff, who’s leaving the Legislature at the end of the year because of term limits. 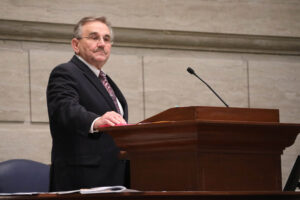 Agriculture is huge in the district.

No Democrats filed for Libla’s seat, which means the winner of the August 4th primary will be the next senator from the district.

Representative Shawan is finishing his first term in the Missouri House. He’s a former Butler County emergency management director. One of his main priorities as a legislator and during the campaign is supporting law enforcement and first responders.

Shawan filed legislation this year to increase penalties for those who flee from police, in high-speed pursuits. Shawan’s cousin, Bob Adams, testified for the bill. Adams testified that his daughter was killed in 1998 after a 14-year-old suspect fleeing police slammed a stolen vehicle into his daughter’s car.

Bean is the son of former State Rep. Otto Bean, R-Holcomb. Jason Bean is a farmer and is currently the chairman of the Fisher Delta Research Center’s advisory board. Missouri Farm Bureau has endorsed Bean, and says the 25th district “is the number-one agriculture district in the state of Missouri.”

Eddy Justice has been a State Farm agent in Poplar Bluff for more than 20 years. He’s also a former chairman of the Butler County GOP Committee, and served briefly on the Missouri Board of Education. Justice is campaigning against government overreach, and for the Second Amendment and jobs.

Former State Rep. Stephen Cookson, R-Poplar Bluff, served four terms in the Missouri House, from 2011-2018. Cookson was one of the first GOP lawmakers in the Legislature to call for then-Governor Eric Greitens (R) to resign in January 2018.

Cookson focused on organ donation, while he served in the Legislature. Governor Greitens appointed him to Missouri’s Organ Donor Task Force. Cookson is campaigning on conservative, rural values. He’s a former teacher and served as school superintendent in Naylor.

The August primary winner will replace Libla, who chairs the Senate Transportation, Infrastructure and Public Safety Committee. Libla was elected to the Missouri Senate in 2012 and was re-elected in 2016.

Libla’s top priority has been transportation. During an interview with Missourinet in July, Libla said that Missouri is not funding roads and bridges adequately. He says Missouri’s gasoline tax needs to be increased, noting the state’s 17-cent per gallon tax has remained the same since 1996.