You are here: Home / Archives for Hockey

Jake Allen responds by lowering his head after allowing a goal off the faceoff in the second period.

The Florida Panthers overcame 2-0 and 3-2 deficits to beat the Blues 7-4 at Scottrade Center.  Vincent Trocheck scored twice for Florida, which scored three consecutive goals late in the second period to take a 5-3 lead.  Colton Sceviour added a shorthanded goal in the third after picking the pocket of Alex Pietrangelo to make it a 6-3 game.

The Blues got off to a quick start with goals from Paul Stastny and Colton Parayko in the first, and Vladimir Tarasenko scored early in the second to put the Blues on top.  Tage Thompson also scored for St. Louis.

Mike Yeo was critical of all three phases…offense, defense and goaltending.  Alex Steen was a minus-4 and captain Alex Pietrangelo was a minus-3 and was caught several times looking as though he was playing on his heels.

Check out my audio feature after each Blues game, called “Yeo, what’s up?”  Here’s a collection of Yeo’s hottest takes.

The Blues have dropped their last three games on the heels of a three-game winning streak.   The Blues are off for an entire week and play next Tuesday in Toronto. 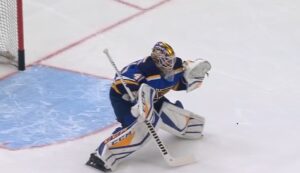 Carter Hutton leads the Blues to their third straight win

Paul Stastny scored six minutes into the third period and that stood up as the Blues got by the Golden Knights 2-1 at Scottrade Center.  Alexander Steen staked St. Louis to a 1-0 lead midway through the first before Vegas tied it in the second.  The Blues have won three straight.

Carter Hutton, making his third straight start in place of number-one goalie Jake Allen, earned his eighth win of the season and is 12-3 in his last 15 starts.  He made 32 saves including a couple a big saves in the third with the game tied.

The Blues are back on top of the Central Division.  They vaulted into the division lead with last night’s win.  The Blues are 26-15-and-2 with 54 points, one ahead of second-place Winnipeg and two up on defending Western Conference champion Nashville.  St. Louis is just two behind Vegas for the top seed in the West.

They skate in Philadelphia tomorrow.

Carter Hutton stopped 24 shots through overtime and both New Jersey attempts in the shootout to lift the Blues to a 3-1 win on Tuesday night at Scottrade Center in St. Louis.   Hutton improved to 7-3-0 on the season and helped send the game to the shootout with a huge pad save on Marcus Johansson with 2:09 left in overtime.

Brayden Schenn and Vladimir Tarasenko scored in the shootout for the Blues. Tarasenko and Vladimir Sobotka scored in regulation as the Blues won their ninth straight against New Jersey, dating back Jan. 21, 2014.

The Blues finish their three-game homestand tomorrow against Vegas.

The St. Louis Blues announced a one-year affiliation with the Tulsa Oilers of the ECHL for the 2017-18 season.

“We are proud to extend our footprint to Tulsa and partner with the Oilers for the 2017-18 season,” said Blues President and General Manager Doug Armstrong. “The Oilers are a strong organization from top to bottom and will provide a great opportunity for our young prospects to continue to develop their game.”

“It is truly an honor for us to affiliate with such a class organization like the St. Louis Blues,” said Oilers General Manager Taylor Hall. “Our fan base will be thrilled as we have many Blues fans here in Tulsa.”

The Tulsa Oilers begin their fourth ECHL season and tenth season of hockey at the BOK Center on Friday, October 13, when the club hosts the Kansas City Mavericks.

St. Louis Blues Vladimir Tarasenko of Russia turns to go to the bench after celebrating his first period goal against the Nashville Predators at the Scottrade Center in St. Louis on April 28, 2017. Photo by BIll Greenblatt/UPI

KMOX Sports is reporting that the first of three phases to renovate Scottrade Center, home of the St. Louis Blues, will begin this summer.  Thanks in part to $65 million in funding from the city of St. Louis and $90 million of their own money, the Blues will spruce up their 23-year old building.  It will take the next three summers before all the changes are complete.

The first phase won’t start until late June and will finish in mid-September.  Among the initial moves will be replacing the entire system that is used to make the ice, which will entail pulling up the entire floor, including the concrete and installing a new ice plant.

Fans will notice a new videoboard, a new sound system and a state of the art sports lighting system, replacing the current system which runs Windows 95.  Renovations will also take place on the concourses and updating restrooms.

Locker rooms will also be updated to meet NCAA specifications.

Ryan Ellis and James Neal scored in the third period to give the Nashville Predators a 2-1 win over the Blues in Game 4 of the Western Conference Second Round at Bridgestone Arena on Tuesday.  The Predators lead the best-of-7 series 3-1 and have won eight in a row at home in the Stanley Cup Playoffs dating back to last year. The Blues must win three straight to advance to the conference final for the second year in a row.

Ellis continues to kill the Blues.  He scored on the power play to put the Predators ahead 1-0 at 5:09. Following a Filip Forsberg shot, Ellis got the puck past goalie Jake Allen after a scramble for his fourth goal.  Ellis has a seven-game point streak, including a goal in three straight games against the Blues.

Neal scored unassisted to give the Predators a 2-0 lead at 13:03 on a wrist shot from above the right faceoff circle. 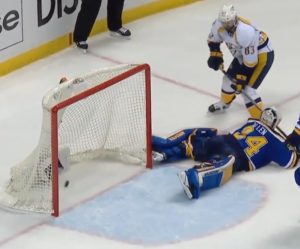 Jake Allen lays out as the puck gets past him late in the third period.

Goalie Jake Allen misplayed a bouncing a puck that was poked between his legs by Nashville’s Vernon Fiddler, breaking a 3-3 tie and sending the Predators to a 4-3 victory over the Blues in Game One of this second round Stanley Cup Playoffs series on Wednesday night in St. Louis.

“Guys fought back great,” Allen said. “A little mistake by me cost us.”

Allen is right, his teammates did fight back great, from a two-goal deficit to start the third.

The Blues were actually down two goals in the second when I tweeted about two goals leads not being safe.  Defenseman Colton Parayko answered after he had all kinds of time with the puck and sniped one past Pekka Rinne to make it a 2-1 game.

Nashville’s P.K. Subban had a goal and an assist.  Subban’s shot was saved by Allen, and then bounced off Filip Forsberg’s skate and into the net for a 3-1 lead, coming 15 seconds after Parayko’s goal.

After being outplayed severely in the second period, the Blues rallied with goals from Jaden Schwartz and Vladimir Sobotka to knot the game a 3-3.

Schwartz scored his third of the playoffs at 6:48 of the third, and Sobotka tied it with a wrist shot from the right circle over the glove of Rinne that clanked off the inside part of the post and in with 10:38 remaining.

Then Allen misplayed a bouncing puck.  Instead of staying down and protecting a tight angle against Fiddler, Allen attempted to poke the puck away from the Nashville forward, but Fiddler flipped the puck past Allen for the lead.

“We dug ourselves a hole in the second period and I liked the push back and the fact we came out the way we did (in the third period),” Blues coach Mike Yeo said. “There are some things we can learn from that but the reality is the second period was not good enough and ultimately it cost us the game.” 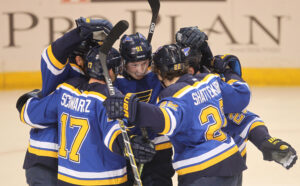 Jaden Schwartz had a goal and two assists to lead the Blues to a 6-3 win over the Panthers on Thursday night in Florida. David Perron, Vladimir Tarasenko and Alex Pietrangelo each had a goal and an assist, and Patrick Berglund and Ryan Reaves added goals as the Blues improved to 13-2-2 in their last 17 games.

Jake Allen had 29 saves for the Blues, who remained one point ahead of Nashville for third place in the Central Division.

Before the game, the club announced that Vladimir Sobotka will return and signed a three-year, $10.5 million contract extension, beginning with the 2017-18 season.  The 29-year old Sobotkawill join the Blues for their game against the Carolina Hurricanes on Saturday. He has spent the past three seasons with Omsk Avangard of the Kontinental Hockey League (KHL).

Before playing in the KHL, Sobotka spent four seasons with the Blues, recording 101 points, including 29 goals, in 247 regular-season games.