You are here: Home / Archives for highway patrol

The chairman of the House and Senate budget committees are asking the Highway Patrol to restrict the use of state-owned aircraft as a cost-saving move, in light of state revenue coming in below projections.  The two Republicans raise the issue in continued criticism of and response to Governor Jay Nixon’s (D) actions that cut or restrict more than $780-million dollars in the state budget for the fiscal year that begins Tuesday. 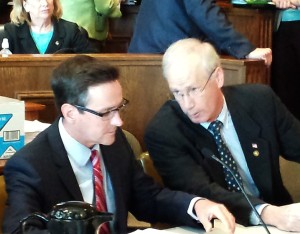 They focus on the use of state planes by the governor to travel the state to events including the opening or expansion of new businesses, speaking engagements and the signing or vetoing of legislation.

In a statement Senate Budget Committee Chairman Kurt Schaefer (R-Columbia) says of Nixon, “While he continues to cut services for some of our most needy and education, he flies around in his state-of-art $6 million plane using state money to pay for the expense of pilots, maintenance, fuel, and other associated travel costs.”

He and House Budget committee Chairman Rick Stream (R-Kirkwood) on Tuesday sent a letter to the Patrol regarding the use of the state aircraft it maintains.

“We budgeted as though our revenues would grow at a certain rate, and that didn’t happen,” said Stream. “Until we can have further budget analysis, we ask the highway patrol to restrict use of all state-owned aircraft unless it is within the core mission and duty of the department to maintain public safety.”

A release from the Senate and House press offices says legislators are asking “certain state departments to look at cutting waste after the governor’s actions” on the budget, but only specifies the request made of the Highway Patrol.

Seven people have been killed in highway crashes over the Thanksgiving holiday. Three of them died Saturday, Nov. 30, when the driver crossed the center line on West Hawken Cemetery Road in Miller County, striking another vehicle head on. The driver and two passengers were pronounced dead at the scene.

Another head-on collision claimed the life of a Hartville man on Highway 38 when he passed another car with his motorcycle and rode into the path of an oncoming car. That crash happened in Wright County Friday, Nov. 29.

Two people from Boone county were also killed Friday, Nov. 29, in a head-on crash north of Old Missouri 124, again when their vehicle crossed the center line and struck an oncoming car.

Thursday, on Thanksgiving, a St. Robert woman was killed in single-car accident in Pulaski County. The Highway Patrol reports she drove off the left side of Highway 28, struck a utility pole, overturned and then struck a second utility pole.

Four of the six fatalities in motor vehicles were not wearing a seatbelt.

Fatal crashes over the holiday weekend are up slightly from last year, when six people died on Missouri roads over the Thanksgiving holiday counting period.

The Superintendent of the state Highway Patrol has faced questions from the House Budget Committee about his agency’s purchase of a new plane. 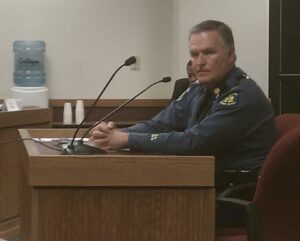 Highway Patrol Colonel Ron Replogle answers the questions of the House Budget Committee about the recent purchase of a $5.6 million plane.

Colonel Ron Replogle tells the Committee the idea to purchase the new $5.6 million dollar plane was his and his department’s, and was approved by the Department of Public Safety and the Office of Administration. He says the purchase was put out for bid December 6 and ads were placed in newspapers in Kansas City and St. Louis. It was awarded December 17 and the funds were transferred December 20.

“There are people in the building that believe the plane was more of a political purchase and that would aid in certain people’s aspirations as they go forward in the year.”

Replogle says the plane can not legally be used for political purchases, but says he regrets not calling legislative attention to the purchase earlier.

“Hindsight’s 20/20. I’ll apologize not doing that. We’ve visited with some of those folks after the fact trying to make some of these points known of the need for the aircraft. That’s my mistake and I apologize for that. We should have come to several of those folks beforehand, laid this all out for you … the needs for it … so that it wouldn’t look like what many people are accusing of us doing here.”

Replogle says he regrets the unfavorable light that the situation has cast on the Patrol, but makes clear nothing illegal or inappropriate was done.

“I’m not a politician, I’m a police officer. I run a police organization. I guess maybe I don’t understand some of the issues surrounding the plane with some of the comments. I certainly understand the questions of why we went outside the normal budget process to purchase this plane.”

Replogle says the plane joins a 1999 craft that the Patrol inherited from the Office of Administration when it took over operation of the state’s air service in 2006. He says he wanted to have two aircraft to serve 22 state agencies.

He says only about 30 percent of the use of the personnel aircraft is done by the Patrol, for missions including prisoner transport, drug trafficking interdiction and investigations. 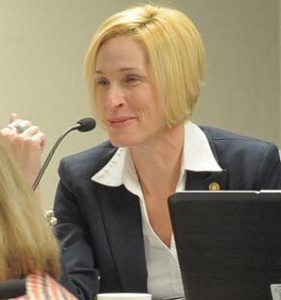 Replogle estimates the plane costs about $900 per hour to operate, which was what concerned Representative Genise Montecillo (D-St. Louis) the most.

“I sit in education appropriations … and we’re having to tell young people that we’re cutting their access scholarships, we’re nowhere near fully funding the foundation formula. 900 dollars an hour to drive to a meeting anywhere in the state … I’m going to be honest, I find it appalling. It’s upsetting to me.”

Replogle tells Montecillo he can’t speak for what other agencies do, but says when the Patrol uses the plane it does a cost analysis of the cheapest way to travel.

“We actually plug our salaries in, the time it takes versus flying, versus driving. The flight we took last Friday probably would have been an overnight trip. We would have incurred hotel bills, we would have probably taken as many as three vehicles, and then we plug all those things in. We actually have a formula to show that it could be a cost savings for us to fly versus driving.”

“We’re in the process of changing out patrol fleet over from the Crown Victoria to mainly the Dodge Charger … we have slown down our ability to be able to get that Charger out the door because it’s more involved in the wiring processes for red lights, sirens, we now are installing two radio systems … we had ordered 350 new Dodge Chargers this year and we can’t get them out quick enough so we have delayed the purchase of about 125 of those … into next year.”

Replogle says the plane is a year-old model that the Patrol was offered a discounted price on through the end of 2012, and that made him move quickly on the purchase process. He says the purchase came with extended warranties and training for the Patrol’s four pilots. Replogle says the Patrol used a sole source bid in order to find a plane with the same operational systems that its pilots are certified under.

The Committee asked the Patrol to provide all correspondence regarding the plane with the Department of Public Safety, the Office of Administration and the Governor’s Office. Replogle says that information is being gathered. 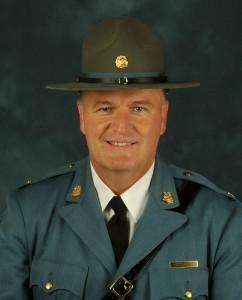 Replogle says he doesn’t think the patrol will notice a big change after the transition in leadership because he supports many of the successful programs Col. James Keathley put into place. One such success he noted is the reduction in traffic fatalities. Missouri has hit a low not seen for decades. Both he and Keathley attribute the reduction to strengthened enforcement in drinking and driving as well as public awareness campaigns.

However, Replogle says accidents due to inattention — namely because people are texting while driving — is a new challenge the patrol is facing.

Replogle is a 26-year veteran with the patrol, including extensive work with the Criminal Investigation Bureau. END_OF_DOCUMENT_TOKEN_TO_BE_REPLACED

Ford says it’s going to stop making the car that is the heart of hundreds of police fleets in the country, including Missouri’s Highway Patrol. END_OF_DOCUMENT_TOKEN_TO_BE_REPLACED