You are here: Home / Archives for higher education

The House Budget Committee Chairman is proposing wiping out the Governor’s cut to higher education, in part with money that supports some of the state’s blind. 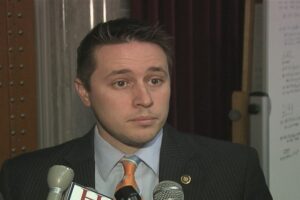 Chairman Ryan Silvey (R-Kansas City) proposes filling back in the $106 million dollar cut the Governor proposed to higher education. $28 million of that would come out of the Supplemental Aid to the Blind program. He says people need to understand what that program is and who it helps.

“There is the emotional argument which just labels people and groups them together … then there’s the argument where you actually look at the program and you see that we’re talking about 2,800 people who have income, and that their income is too much for Medicaid. That’s the population that we’re dealing with.”

The Governor blasted the elimination of that program. In a statement, he says in many cases, it provides services that “are the crucial elements that enable them to live in their own homes.” Nixon says, “We should not, and cannot, remove the funding for this program,” and calls the proposal, “just plain wrong.”

Another $5 million is what the Governor proposed putting into the K-12 foundation formula, which Silvey says was an election year stunt.

“For me it was a matter of where are you getting the best bang for your buck in the education dollar. Is it $5 a year per student, which is what his increase in elementary and secondary education would have been, or is it close to five percent of restoring the cut that he made to higher education.”

Silvey’s proposal does restore $889 thousand to sexual violence victim’s services, and he says some of the recommendations of the Appropriations Committee on Health, Mental Health and Social Services have not been followed after a working group reexamined those in the last week.

The House Budget Committee will meet several days next week. Republican leadership expects the budget to reach the floor the week after Spring Break.